The Petaluma Gap is a term coined as recently as thirteen years ago and refers to a narrow coastal mountain opening in the southern Sonoma County countryside connecting the Pacific Ocean near Bodega Bay and Tomales to the San Francisco Bay. The Gap is roughly 22 to 31 miles in width with walls rising 2,000 to 3,000 feet above sea level. The western edge runs approximately from Tomales to Bodega. The southern border is the hamlet of Nicasio and the northern and eastern borders start around Penngrove and Cotati and run southeast along the Carneros Ridge, ending in San Pablo Bay. In the simplest of terms, the Petaluma Gap can be thought of as the area south of the Russian River Valley to Mt. Tamalpais in Marin County.

On the map below I have roughly outlined the Petaluma Gap. Bodega is a few miles inland from Bodega Bay and Tomales is just east and south of Dillon Beach. The tiny town of Nicasio is a few miles east of where the Highway 1 marker is on the map. San Pablo Bay is the body of water bordered on the North by Highway 37. 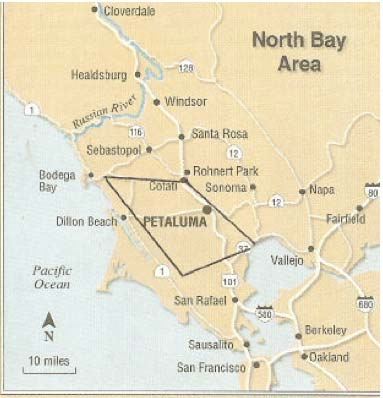 The Petaluma Gap creates a very unique microclimate. Early morning ocean fog enters the Petaluma Valley, advances north through Cotati into the Russian River Valley and south to San Pablo Bay. Intense midday heat is moderated in the early afternoon by cooling Pacific Ocean breezes (thus the often-used term, “Petaluma Wind Gap,”) and chilly evening temperatures helps the ripening grapes maintain crisp, refreshing levels of acidity. The area has been compared to Carneros which is under similar climatic influences, but the fog and wind arrive earlier in the day than in Carneros and stay longer the next morning. Some areas of the Petaluma Gap are as cold, or even colder than Green Valley, Freestone, Santa Maria and Sta. Rita Hills. Rainfall is moderate (20 to 24 inches) so that irrigation is necessary for at least part of the growing season.

In 2006, the Petaluma Gap Grape and Wine Alliance was formed to promote the region's identity (visit the website at www.petalumagap.com). The Petaluma Gap has a 150 year tradition of grape growing and currently there are over 3,000 acres of vineyards and four wine tasting facilities in the Petaluma Gap (Adobe Road, Corda, Kastania, and Keller Estate). An accurate map of the Petaluma Gap is available for viewing and purchase at www.themapstore.com.

14.5% alc., 200 cases, $38. Wente (4) clone. · Pale straw color in the glass. Shy upon opening revealing subtle aromas of fresh brioche, butter creme, poached pear and crushed rock with smoky oak showing up over time in the glass. Understated and seductive in style with appealing flavors of vanilla creme and lemon zest and the faintest cinnamon spice and minerality. Bright acidity lifts the pleasing finish. Still young and I am sure will match the 2007 version tit for tat with another year in the cellar. Very good.

14.5% alc., 400 cases, $45. · Swan selection and Dijon 114, 115, 777 and 828 clones. Very lovely, even captivating, perfume of ripe strawberries, raspberries, herbs, red licorice and graham. Tasty black raspberry and strawberry attack with a touch of earthiness. Beautifully composed with striking mid-palate intensity and a velvety mouth feel. Even at this young age, this is a charming wine that is drinking nicely and well worth your interest. Very good (+).

14.2% alc., $38. · A marvelous wine styled perfectly to my preferences. Complex nose of buttered popcorn, honey, lemon zest, honeydew and spiced apple. Delicious flavors of pear tart and baking spices. A demure wine that is beautifully proportioned with a lasting and aromatic finish.

14.5% alc., 350 cases, $45. · Delicate aromas of well-oaked cherries and berries. Medium-weighted core of dark red stone fruits and blueberries with underlying oak toast. A gentle wine with admirable finesse, soft tannins and a silky mouthfeel, but with more intrusion of oak than I prefer. Decent.

Pfendler Vineyards is poised for success. The mature Chardonnay plantings are already showing their pedigree and Bjornstad will find his sure footing with the Pinot Noir with each passing vintage. Both Kimberly and Greg (pictured below) are cut out of the same mold, that is, soft spoken and disarmingly charming, creating a good match up for this new winery. 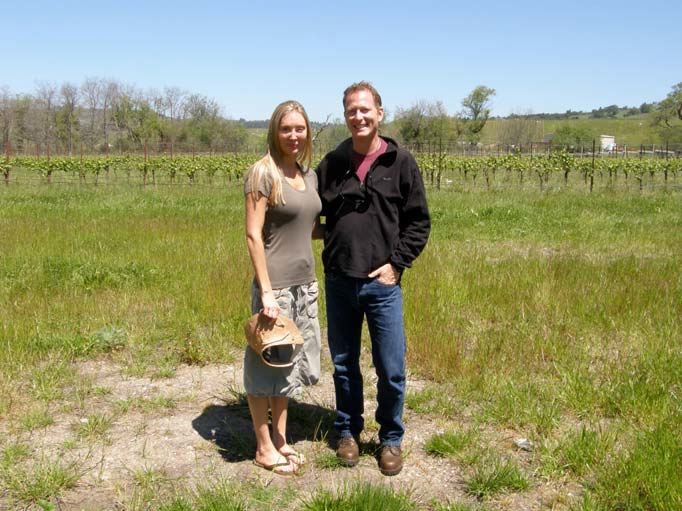