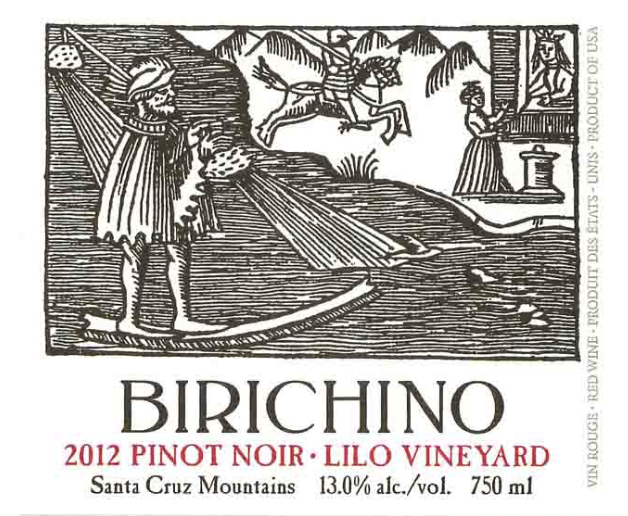 Founded in Santa Cruz in 2008, owners and winemakers Alex Krause and John Locke draw on a combined 35 years of making and selling wine in California and Alsace, Publia, Piemonte and beyond. The name, pronounced "biri-kino," is Italian meaning naughty or mischievous.

Their first Pinot Noir is a 2011 Saint Georges Pinot Noir from the Central Coast sourced from the southern Santa Cruz Mountains (under $20). Their flagship wines are Malvasia Bianca and Grenache.

The winery was originally launched to make Malvasia, but their UK importer begged for a red wine and they branched out into working with 104-year-old Grenache. Then only days before harvest in 2011, they were offered the chance to work with the 25-year-old Saint Georges Pinot Noir Vineyard owned by the Bessons who grew the Grenache. Most of the Pinot Noir had and still does go to Calera.

The Saint Georges Vineyard is located on the eastern side of the Santa Cruz Mountains and is named after the father and son, George Besson Jr. and Sr., whose families have lived on the property since the 1920s tending the vines. The 2013 Saint Georges Vineyard Pinot Noir has a fair amount of 5 to 6-year-old grapes from Lilo Vineyard in it for the first time and a little Pinot Noir from a limestone and rocky shale site where the 25-year-old Malvesia is planted on the Santa Lucia Highlands side of Monterey County.

Another Pinot Noir is produced from the Lilo Vineyard which is about twelve years old and located in a much cooler steep site planted in slate, sandstone and schist at the fog line at 600 to 800 feet.

A Cinsault was added in 2012 from Bechthold Vineyard first planted in 1886. A Jurassic Park Chenin Blanc is sourced from old vines dating to the early 20th century located in Santa Ynez.

The winemaking features native ferments, neutral barrels and avoidance of fining and filtration when possible.

A tasting room in downtown Santa Cruz opened in 2018 13.0% alc., $24, screwcap. A blend of grapes from four diverse sitesAmbient yeast with a dollop of whole cluster. (20%) Aged in neutral oak and bottled unfiltered. · Light reddish purple color in the glass. Lovely aromas of cherry, red berry and sandalwood. Lighter styled, with bright flavors of strawberry and cherry composed in a charming fashion with easy tannins and no noticeable oak influence. This delightful wine offers great value and will satisfy your Pinot urges without the need for contemplation. Score: 90. Reviewed March 29, 2017 ARTICLE » 13.0% alc., pH 3.62, TA 0.55, $33. Aged a little more than a year in old French oak barrels and bottled unfiltered. · Medium reddish purple color in the glass. Darker fruits are featured in this wine which has an earthy, woodsy flora bent. Very suave and polished on the palate with flavors of boysenberry and black plum accented with spice and tea. Beautifully balanced with well-integrated tannins. Even better later in the day from a previously opened bottle. More cajones than the Saint Georges bottling. Score: 90. Reviewed January 23, 2015 ARTICLE »

13.5% alc., $18.99, screwcap. Pronounced âbiri-kino,â and meaning naughty or mischievous in Italian. This winery was founded in 2008 by Bonny Doon alumni Alex Krause and John Locke. Ambient yeast, a dollop of whole cluster, elevage in neutral barrels and unfiltered. Sourced from a vineyard just below the southern end of the Santa Cruz Mountains. · Medium reddish-purple robe in the glass. The nose is rich with aromas of well-spiced berries and cherries. Elegant, but flavorful, offering a mix of fruits including dark cherries, purple grapes, and raspberries. Supple tannins and a dry, but shallow finish. Nicely crafted and easy to like, but lacks the complexity that oak brings to the mix. Still, I would gladly drink this any day with dinner. Good (+). Reviewed April 13, 2013 ARTICLE »