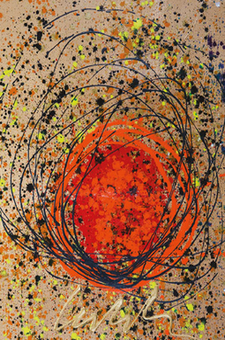 The first vintage of Lingua Franca Pinot Noir and Chardonnay, 2015, was produced at Coehlo Winery using purchased grapes, with estate-grown bottlings from its 66-acre vineyard in Eola-Amity Hills following in 2016.

Stone previously managed Evening Land Vineyards in Oregon after leaving the restaurant business in 2006 (he had been a sommelier at Four Seasons, Charlie Trotter's and Rubicon restaurants). He was the ninth Master Sommelier in the US and was the first American to win the prestigious Best International Sommelier in French Wines competition in Paris. He told The Drinks Business that he sold his personal wine collection to help fund the purchase of the estate vineyard and establish the winery.

A winery was constructed and completed in 2016 in collaboration with consultant Dominique Lafon, winemaker Thomas Savre and Larry Stone. Savre obtained a bachelor's degree in wine science and a dual master's degree in enology and winemaking, all from the University of Burgundy. At the same time, he was working at Domaine de la Romanée-Conti, Domaine de Beilène, Domaine Dujac and Maison Nicolas Potel. He then interned for E. & J. Gallo. He joined Evening Land as Dominique Lafon's assistant winemaker, enologist and viticulturist in 2013. Two years later, he was recruited by Lafon and Stone to become the winemaker at Linqua Franca. 13.0% alc., $50. Inaugural release from the Estate Vineyard. Dry farmed organically on Basalt Jory and Nekia soils. Fruit is sorted in vineyard, then sorted by hand, and then sorted by a special de-stemmer/sorter. · Dark garnet color in the glass. The black cherry aromas are very slow to arrive in the glass. A bit brutish on the palate upon opening, but blossoming from a bottle opened several hours prior. A step up from the AVNI with more fruit intensity and more finishing length. Excellent pizazz with ideal tannin and acid integration and a suede texture. I absolutely loved this wine over time. Recommend decanting if you open now. Score: 94. Reviewed June 29, 2018 ARTICLE »

13.0% alc., 340 cases, $60. Crafted from Dijon clones farmed to exacting standards by Mimi Castell in the hills above the village of Hopewell. · Moderately light garnet color in the glass. Lovely aromas of black cherry, woodland spice, pipe smoke and toasty oak. The middleweight black cherry, boysenberry and black raspberry flavors are very satisfying. Admirable balance, with a compliment of toasty oak in the background and an extended and generous finish. Even better when tasted the following day from a previously opened and re-corked bottle with an emerging seductive nose and a memorable finish. Score: 93. Reviewed February 2, 2019 ARTICLE » 13.0% alc., $40. Avni means âof stoneâ or ârockâ and is a signature of Eola-Amity Hills geology. Fruit is from Jory soils found in Salemâs Bunker Hill Vineyard, Dundee Hills Durand Vineyard, and a Yamhill-Carlton site with a contribution of fruit from Laubejac vineyard with Willakenzie soil. · Light golden yellow color in the glass. Soaring aromas of lemon curd, spiced apple, pineapple and ocean breeze. Highly satisfying in a crisp and bright style, featuring flavors of citrus, pear and green apple embellished with notes of slate, steel and subtle buttery oak. The finish is notable for its tight grip of acidity and length. A lovely wine. Score: 93. Reviewed June 25, 2017 ARTICLE »

13.5% alc., $50. Named after three individuals who volunteered to work the first harvest. The crew cut the ends off the clusters for this whole berry cuvÃ©e. A portion of fruit fermented via carbonic maceration (grapes ferment inside their own skins in the absence of oxygen rather than being crushed first). This produces a notably fruity and juicy wine. It was then blended with traditionally fermented Pinot Noir that has more serious extraction and tannin. · Moderately light garnet color in the glass. Upon opening, the nose is rather primary, offering demure aromas of red cherry, spice and sous-bois. Tasted two days later from a previously opened bottle, the nose was more aromatic with fresh scents of red cherry and strawberry fruits and burnt tobacco. Like the nose, the palate was much more expressive two days later. Silky and elegant on the palate with a mid weight array of red fruits including cherry, cranberry, raspberry and dark strawberry accented by spice. Fresh and lithe, with modest tannins, complimentary oak, and an explosion of red cherry on the finish. Score: 93. Reviewed June 25, 2017 ARTICLE »

13.5% alc., $60. Named after Ryan Hannaford who is an Aussie transplant to the Willamette Valley and has a talent for biodynamic farming. The sources for this cuvÃ©e are tended by Ryan and come from two Jory soil vineyards near Lingua Franca (Seven Springs and Black Walnut vineyards). · Moderately light garnet color in the glass. My notes reflect my impressions of the wine when tasted two days after opening. Seductive aromas of cherry, strawberry and spice lead to an elegantly composed wine with vibrant flavors of cherry and strawberry. Suave tannins, noticeable mid palate intensity, and a remarkable finish filled with sweet cherry and strawberry aromatic goodness. Score: 94. Reviewed June 25, 2017 ARTICLE »

13.5% alc., $60. · Moderately light garnet color in the glass. My notes reflect my impressions of the wine from a previously opened bottle two days prior. Initially the nose and palate were quite primary. Penetrating aromas of dark red cherry and berry, dark red rose and anise. Mid weight plus in style, offering the vivid essence of fresh dark red cherries. Somewhat earthbound, with an attractive note of iron minerality. Expansive in the mouth, impeccably balanced, and sporting a remarkable finish replete with dark cherry fruit that is tenacious for what seems like a minute. Score: 94. Reviewed June 25, 2017 ARTICLE »

13.5% alc., $90. · Moderately dark garnet color in the glass. Aromas of fertile earth, spice, rose petal and black cherry lead off. Very similar to the 2016 vintage, except a little more concentration in a mid weight plus style and seemingly riper dark red and black fruit flavors. More gutsy than the 2016 bottling with muscular tannins that come on with a rush on the succulent-fruited finish. Needs more time in the cellar to integrate and moderate the tannins. Score: 92. Reviewed February 2, 2019 ARTICLE »