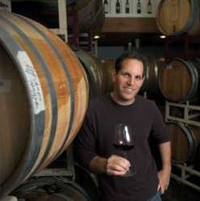 Benjamin's background would not suggest that he would become a winemaker. He hails from Amherst, Massachusetts, and has a BS degree in Animal Sciences and a BA degree in Italian from the University of Massachusetts. He caught the wine bug in 1983 at a summer job at Chicama Vineyards on Martha's Vineyard. He used his science background to land a harvest intern lab technician posiiton with winemaker Daniel Gehrs at Zaca Mesa Winery in Santa Barbara County. He became Gehr's winemaking assistant and when Gehrs left in 1998, he took over as head winemaker at Zaca Mesa. He left Zaca Mesa in 2000 to launch his own label, taking over the winemaking program and vineyard re-development for the owner of White Hawk Vineyard.

A tasting room is located at 724 Reddick Street in Santa Barbara, and is open Wednesday through Sunday.

14.3% alc., $45. Founded in 2000 the producer only bottles single vineyard Pinot Noirs from northern Santa Barbara County. · Complex and intriguing nose of black cherries, sage, oak toast and a hint of smoke. Rich and plush flavors of black cherries, blackberries and blueberries augmented with prominent oak. All silk and satin in the mouth with bright acidity on the back end. The wine picks up interest in the glass, becoming better and better with airtime. Very Caliesque. Reviewed April 18, 2009 ARTICLE »