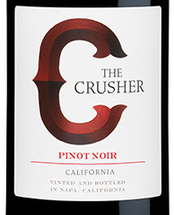 The Sebastiani family feud is one of the most publicized in Sonoma County. In 1986, Sylvia Sebastiani fired her oldest son, Sam Sebastiani, and put her other son Don in charge. Sam Sebastiani started his own winery, Viansa, but it was not successful and was subsequently sold. Sebastiani Vineyards was also sold and Don launched his own company, Don Sebastiani & Sons, which has been very successful. The firm operates largely as a negociant, buying and blending bulk wines.

It is hard to keep up with all the different Pinot Noir bottlings under the umbrella of the negociant wine company, Don Sebastiani & Sons. The main wine division of Don Sebastiani & Sons has been the Three Loose Screws Wine Company which includes the popular Smoking Loon and Pepperwood Grove labels made from purchased bulk wine and selling for less than $10. Pinot Noirs are also released under The Crusher, Aquinas and Don & Sons label and are a step up in quality and price. In 2008 Three Loose Screws Wine Company sold 1.7 million cases and The Other Guys sold 130,000 cases in 2009.

The higher-end division of Don Sebastiani & Sons, The Other Guys, was spun off by the three children of Don and Nancy Sebastiani (Donnie, August and Mia), and includes Moobuzz Pinot Noir. The market for The Other Guys wines is directed at restaurants and retailers and sales were 130,000 cases in 2009. The Other Guys is an innovative brand, directed at millennial wine drinkers, including names such as Loose Fitch, Pennywise, Hey Mambo, Screw Kappa Napa and Plungerhead and new packaging like screw caps and Zork closures. Their tag line says it all, “Laid-back guys, stand-out wines.” I love the idea.

In 2009, Don Sebastiani & Sons was reorganized. The Three Loose Screws Wine Company became Don & Sons under the direction of father Don's son Donnie and The Other Guys became a stand-alone company run by son August. Both companies are under the Don Sebastiani Family Wines umbrella.

The wines are in widespread retail distribution.

2017 B Side North Coast Pinot Noir

14.5% alc., $17. Vinted and bottled by Don Sebastiani & Sons, Napa, CA. · Aromas of oak and seabed. Earthy black cherry fruit on the palate with a medicinal note and a shadow of oak. Good cut on the short finish. With Pinot Noir, you get what you pay for. Score: 87. Reviewed August 1, 2021 ARTICLE »

13.5% alc., pH 3.76, $20 (retail, but often sold at $14-$15), yellow Zork closure. Topographic map of Monterey on the label where the grapes are primarily sourced. Best barrel lots from Monterey County in the 2007 vintage. Aged 10 months in French oak. · Initially a very bright perfume of cherries, strawberries and raspberries, leading to a smoky influence over time. Moderately rich core of berry fruit with a smoky overtone. Minimal tannins and easy to drink. Decent Reviewed October 29, 2009 ARTICLE »

13.5% alc., $12- $13, white synthetic cork closure. · The nose is composed of black fruits, herbs, oak and cedar. Moderately lush dark fruits create a plush mouth feel. Woodsy and earthy with some oak char in the background. Smoothly textured, this bold wine represents the dark, loamy side of Pinot Noir. Decent. The 2008 vintage is in current release but I have not sampled it. Reviewed October 29, 2009 ARTICLE »