Born in Otago New Zealand, Grant graduated from Lincoln College, Canterbury, New Zealand. His wine making career began in California where in 1980 he helped build Pine Ridge Winery and worked as assistant winemaker until 1986. In 1987 he helped build another Napa Valley winery, Domaine Napa, where he was head winemaker until 1993. Lured by big trout, clean air, fewer people and the potential he saw for Otago wines, Grant returned home later that year to become Gibbston Valley’s winemaker. At that time there were 125 acres of grapes in Otago; today there are over 4,000 acres.

Grant has made wine for Gibbston Valley for 13 years before leaving to concentrate on Valli. Throughout his career in New Zealand, he has made the first wines for a number of other very successful Otago wineries.

In 1998 he established his own label, Valli, and purchased 16 acres in Gibbston. Grant purchases fruit from Bannockburn and Waitaki to produce two other single vineyard Otago Pinot Noirs. Valli’s aim is to produce single vineyard premium Pinot Noirs highlighting the differences in Otago’s sub-regions.

Grant’s winemaking for the past 14 years has been dedicated primarily to Pinot Noir. In 1995 he helped to establish Oregon’s renowned Pinot Noir producing winery, Archery Summit and has consulted there for most vintages since. Like a number of other Australian and New Zealand Pinot producers he has worked at Domaine Dujac in Burgundy. Having just completed 40 vintages.

Elizabeth Keys joined Valli in 2006. She has a Winemaking and Viticulture degree from University California Davis and has completed nine harvests worldwide. She has also consulted for an American Import company primarily sourcing Australian and New Zealand wines. Elizabeth’s main roles is sales and marketing but her winemaking experience also adds depth, fresh insight, and another palate when it comes to winemaking decisions. Elizabeth is the youngest member of the Valli family; her intelligence and energy is a vital ingredient to the family blend.

The wines are exported to the United States by RO Imports LLC, Napa. 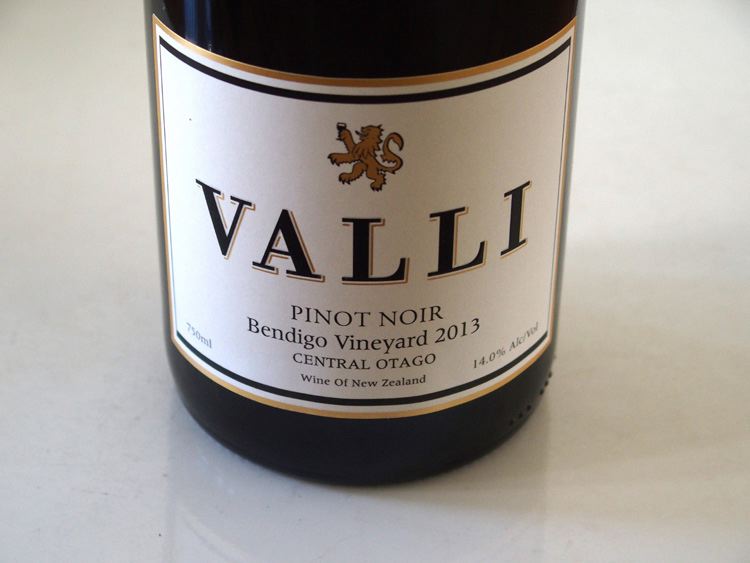 14.0% alc., pH 3.37, TA 0.79, 440 cases, $44.99, screwcap. Grant Taylor has been making wines in the region since 1993 and has crafted wines for many iconic Central Otago wineries as well as his own label. Valli was established in 1998 and named after his great-great grandfather, Giuseppe Valli, who immigrated to New Zealand. This wine is a single vineyard bottling from Bendigo. Harvest Brix 25.3Âº. Clone 777 planted in 2000. 33% whole cluster, 22 days on skins, aged 11 months in French oak barrels, 34% new. · Dark reddish purple color in the glass. The perfume of blackberry, cassis and spice draws you into the glass. On the palate, the fruit intensity is remarkable, featuring a sensory onslaught of violet and black fruit and peppery spice flavors. The bodacious fruit sap is matched to daunting tannins which surface with an astringent charge on the finish. This wine will benefit from several years in the cellar to ameliorate the tannins, and can certainly last well into a second decade. Score: 94. Reviewed February 5, 2016 ARTICLE » 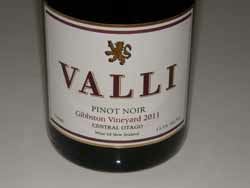 13% alc., $40, screw cap. Imported by RO Imports LLC, Napa, CA. Giueseppe Valli emigrated from an Italian winemaking background to New Zealand in the 1870s. Five generations later, great-grandsons Grant Taylor and Tim Valli continue the tradition. · This wine has an exotic perfume of mahogany, crayon, cardamom, chile and red cherries. Red fruit and herbal flavors are simple and clean, the texture is soft and there is a welcome acid kick at the end. Website: www.valli.co.nz. Reviewed October 14, 2007 ARTICLE » 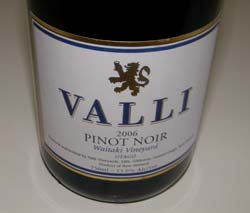