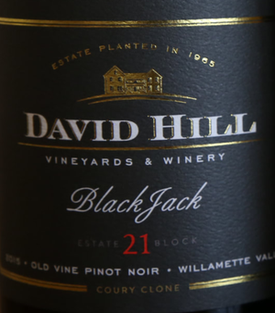 A picturesque wine venue in the community of Forest Grove in the Willamette Valley. Milan and Jean Stoyanov have owned the David Hill property since 1992. They chose the name, David Hill, because they are on David Hill (hill), and on David Hill road.

David Hill was a real person, in effect, the first governor of Oregon before it became a state. During 1993 and 1994 the house and winery buildings on the property were restored. The tasting room is located in an historic farmhouse that was originally built in 1883 by the Reuter family who built quite a reputation for wine until Prohibition when all vines were removed and replaced with fruit trees and potatoes. The site is a popular venue for events, weddings, corporate meetings, etc.

The farm is on 140 acres of which 40 acres are planted with Pinot Noir (50%), Pinot Gris, Riesling, Chardonnay and Gewürztraminer, with some of the oldest vines in the state. The current flagship wine is Estate Black Jack Pinot Noir, a single block (Block 21) and single clone (Coury "clone") that comes exclusively from the first Charles Coury plantings.

An Estate Barrel Select and Estate Reserve Pinot Noir are also produced. The first David Hill labeled wines were released in 2000. The wines have seen a significant increase in quality with the arrival of winemaker Jason Bull. Current production is about 10,000 cases annually

12.8% alc., pH 3.55, TA 0.60, $N/A. Ownrooted Pommard, WÃ¤denswil, and Coury selection Pinot Noir. Aged 15 months in 15% new French oak barrels. · Moderately light garnet color in the glass. There is plenty of toasty oak on the fruit-shy nose that begs for more Pinot perfume. I sensed some possible Brett on the nose. Earthy and rustic on the palate with blackberry, plum and pomegranate fruit flavors framed by tame tannins. The finish is giving of dark fruits and is noticeably lengthy. Several hours after opening, the wine was re-tasted and there was still significant toast shadowing the core of fruit. Score: 89. Reviewed May 29, 2022 ARTICLE » 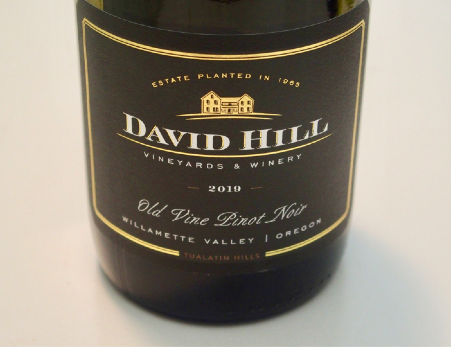 13.4% alc., pH 3.59, TA 0.61, $70. A combination of Pommard and WÃ¤denswil clones and Coury selection planted in â1965.â Aged 18 months in French oak barrels, 5% new and 95% neutral. · Moderate garnet color in the glass. Aromas of red cherry, sandalwood and sweet mulch. Delightful core of fresh spiced cherry flavor. Elegantly composed and charming, with a silken texture, suede tannins and a finish that seems to linger for at least a minute. This wine is clearly recognizable as a special old vine Pinot Noir that has me searching for superlatives. Reminds me of a great 1er Cru red Burgundy. Score: 95. Reviewed May 26, 2022 ARTICLE »

14.1% alc.,pH 3.68, TA 0.57, $55. Aged 14 months in French oak barrels, 30% new. Unfiltered. · Moderately dark garnet color in the glass. Aromas of well-ripened black fruits. Mid-weight plus richly layered flavors of black raspberry, black cherry, blackberry, cassis, and spice. Seamless texture, with a dusting of tannins, tailing off at the finish like silk. Bold and dense in this vintage but enjoyable. Much better when tasted the following day from a previously opened bottle. Score: 91. Reviewed May 26, 2022 ARTICLE »