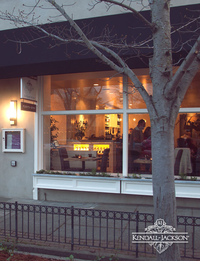 The Jackson family owns 13,000 planted acres along the cool coastal ridges of California, including exceptional Pinot Noir vineyards in the best cool-climate regions including Anderson Valley, Sonoma Coast, Russian River Valley, Carneros, Arroyo Seco and Santa Maria Valley. Only the Sta. Rita Hills is lacking, but the winery may explore this region further in the future. Most of the annual fruit requirements are sourced from the estate vineyards: two-thirds of fruit used in Kendall-Jackson wines is sourced from the family's vineyards.

Since Banke took over the company after Jackson's death in 2011, she has acquired additional vineyards, including 1,365 acres in Oregon (including Zena Crown and Gran Moraine vineyards), the first foyer into this state by Jackson Family Wines. She added 14 new properties and 2,800 acres to the winery's holdings, now totaling about 35,000 acres worldwide. A new winery is scheduled at Zena Crown Vineyard where an estate Pinot Noir will be produced beginning in 2013 or 2014 with Oregon winemaker Tony Rynders as consultant working with winemaker Shane Moore (former associate winemaker at La Crema). The Gran Moraine Vineyard will provide grapes for a Pinot Noir under the La Crema label. Jackson Family Wines also acquired the Hickinbotham Vineyard in Australia's McLaren Vale, reportedly paying more than $10 million for the 445-acre vineyard.

The company is also a partner in Merrain International, an oak barrel stave mill in the Vosges district of France, and distributorships are owned in California, Arizona and Canada.

Nearly every wine is produced from estate vineyards, numbering 10,159 acres across the state. The company also owns 11,055 acres of vineyards internationally. 23% of California vineyards are planted to Pinot Noir. 100% of Kendall-Jackson's vineyards in California are SIP (Sustainability in Practice) Certified and CCSW (Certified California Sustainable Winegrowing) recognized. Total production is about 5 million cases, of which 3 million cases are labeled Kendall-Jackson. Annual revenue is reportedly $500 million.

Kendall-Jackson made its name by producing a consistent, fruit-forward, aromatic type of Vintner's Reserve Chardonnay, drawing from vineyards all over California to form a blend. The wine was very appealing to the American palate because of its hint of sweetness and converted many Americans into wine drinkers. Today the wine is more serious, more dry than it used to be and is 100% Chardonnay.

A tasting room, Partake by K-J, is located near the northwestern corner of the Healdsburg Plaza and is open daily from 10:00 to 5:00. Partake by K-J is an eatery and tasting lounge specializing in wine flights and seasonal bites featuring ingredients from the winery's organic gardens and Sonoma County's culinary artisans. The space spans two rooms with seating for 55 guests. Reservations are suggested (visit partakebykj.com).

Jess Jackson passed away in April, 2011. The future of the winery will fall onto the shoulders of Jackson's youngest children.

15.0% alc., pH 3.60, TA 0.59, 445 cases, $42. Vineyard is located on a high eastern ridge with soils similar to a Goldridge classification. Clone 667, â828,â and 115. Aged 13 months in 95% French oak barrels, 45% new. · Moderately dark garnet color in the glass. The nose combines oak-driven aromas of cardamom spice and vanilla with aromas of mixed berry fruits. Full-bodied and lush on the palate, exhibiting a charge of sweet purple and black berry fruit flavors that are ripe but not overripe that are underscored with a compliment of oak and agreeable tannins. The higher alcohol adds sweetness and luxuriant body to the wine and is well integrated. A hedonistic, masculine Pinot Noir nicely composed in this style. Score: 90. Reviewed April 15, 2018 ARTICLE »

14.5% alc., pH 3.73, TA 0.50, 6,415 cases, $26. 66% Monterey County and 34% Santa Barbara County Jackson Estates fruit. A potpourri of mountain, ridge, hillside and benchland grapes. Crafted from the top 7% of Kendall-Jackson lots. 70% of the wine is from the same vineyard blocks each year ensuring greater consistency. Aged 9 months in predominantly French oak barrels. · Moderate reddish purple hue in the glass. Exuberant aromas upon opening of black cherry, strawberry, clove and forest floor which fade a bit over time in the glass. A cherry-themed wine of good richness with a pleasing compliment of spice and oak. A forward, easy drinking wine. Score: 87. Reviewed May 25, 2015 ARTICLE »

13.5% alc., >50,000 cases, $18. Jackson Estates grown. · Generous aromas of cherries, raspberries and strawberries with hints of exotic woods. Medium-weight flavors of slightly confected red cherries and berries with the slightest oak vanillin evident. Impressively smooth like Elvis on velvet. I kept sipping over an extended period and the wine kept delivering appealing fruit flavor. All you could ask for at this price: low alcohol, smooth texture, simple but tasty fruit, instant drinkability, ease of acquisition, all from a renowned producer. Good (+). Reviewed March 2, 2011 ARTICLE »

alc., >50,000 cases, $18. Jackson Estates grown. · Delicate aromas of darker red berries and raisins with a hint of oak. Mildly intense flavors of strawberries, raspberries and cherries with some persistence on the fruit-driven, dry finish. Smooth in the mouth and easy to drink. Will work beautifully at the table when Pinot Noir is called for. Good. Reviewed March 2, 2011 ARTICLE »

13.5% alc., pH 3.68, $15.69. Kendall-Jackson, who cultivates 12,500 acres of vineyards, is reputedly the largest grower of Pinot Noir in California and the Vintnerâs Reserve Pinot Noir is the best selling Pinot Noir in the United States. This wine is 92% Pinot Noir with a splash of Petite Sirah, Syrah and Zinfandel for added color and complexity. Sourced from multiple California vineyards from Santa Barbara County to Mendocino County. 86% aged for 9 months in French oak barrels (some American oak barrel aging as well). The winemaster is Randy Ullom. Moderate reddish-purple color in the glass. Pleasing slightly confected · Moderate reddish-purple color in the glass. Pleasing slightly confected aromas of strawberries and cherries with supporting oak and cedar. Modestly intense cherry and berry fruit core veering toward cherry Life-Savor flavor. Soft in the mouth with slippery tannins. A fine training wheels Pinot that is highly drinkable and a stellar value. Your wine impaired in-laws will love this wine. Good. Reviewed July 15, 2010 ARTICLE »