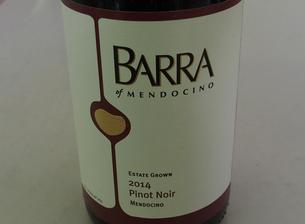 Charlie Barra was born in Calpella, California (near Ukiah) in 1926 to Italian immigrants whose families worked in the vineyards of Italy as far back as the mid 1800s. He spent his early teen years working in his father's vineyard in Northern California and was an accomplished pruner by the age of 10.

In 1955, he bought Redwood Valley Vineyards, 175 acres at the headwaters of the Russian River. He soon converted the vineyard to a premium variety focus, and was among one of the first growers on the North Coast to plant Chardonnay, Riesling, Cabernet Sauvignon and Pinot Noir. Over the next 35 years, he expanded the vineyard to 200 acres and added another six varieties.

In 1997, he started the Barra of Mendocino wines with the release of the 1997 Petite Sirah. All BARRA of Mendocino wines are made from estate grown grapes from CCOF certified organic vineyards. The wines are solid, value priced offerings meant for the table. There is a second label, Girasole, as well (see Girasole).

Today, BARRA of Mendocino has a large winery and tasting room located a short distance from Charlie's birthplace. The tasting room is open daily. Charlie, well into his 80s, still runs the show, but his extended family is involved in the winery as well.

Articles About Barra of Mendocino