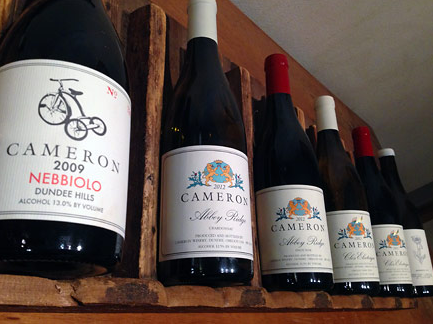 A long-standing producer of Pinot Noir and Chardonnay established in Dundee, Oregon, in 1984 by owner and winemaker John Paul. After working as an assistant winemaker at Carneros Creek Winery in the Napa Valley, he started Cameron with his wife, Teri Wadsworth, and partners Bill and Julia Wayne of Abbey Ridge Vineyard, Marc Dochez and Shawna Archibald. The winery name was inspired by its location in Dundee and was named after the Paul family's Scottish Clan.

The estate vineyard, Clos Electrique, is located at the winery and consists of 2 acres of Pinot Noir, 1.5 acres of Chardonnay and a field blend of white varietals, and 0.5 acres of Nebbiolo. This vineyard is planted to 10 clones. Yields are extremely small (0.5-1.5 tons per acre).

Cameron's oldest vineyard is Abbey Ridge, 22 acres with some vines dating back to 1976. A younger block was planted in 1990 with multiple clones taken from the Clos Electrique Vineyard (named Arley's Leap). A block of Pinot Noir and Chardonnay planted in 1984 on a different hillside at Abbey Ridge forms the basis of Cameron's Willamette Valley bottling. A small part of the vineyard is planted to Pinot Bianco and Pinot Grigio which produce a northern Italian-style white wine called Cameroni Giovanni. Dry farming and organic winegrowing are emphasized.

When Paul was assisting at Carneros Creek Winery, he sought out Bob Sessions of Hanzell who told him the mother block for Hanzell Pinot Noir came from Paul Masson, who had brought it from Burgundy and subsequently was planted by Martin Ray at Mount Eden. Jeffrey Patterson of Mount Eden Vineyards pledged Paul cuttings. Paul has Mount Eden Pinot Noir, not the eponymous clone but a vineyard selection, and the same for Chardonnay. Paul went on to source cuttings from other historic sites and pioneers such as Joseph Swan. Paul believes that a vineyard with the most genetic variation will produce wines of the greatest complexity, and although his Pinot Noirs and Chardonnays owe their distinctiveness to many factors, these selections are an important one.

The Chardonnays are fermented with indigenous wild yeasts and finished with a French yeast to assure dryness. They are fermented in nearly neutral French oak barrels and then left on the primary lees for near 2 years in the winery's cave. They are bottled without filtration. The Pinot Bianco (given the name "Cameroni Giovanni") is fermented in stainless steel and bottled in its youth in early spring. The blended white wine (given the name "Cameroni Giuliano") consists of the grapes Friulano, Pinot Bianco, Pinot Grigio and Auxerrois and a small bit of Moscato. It is finished with higher acidity and given up to a year of bottle age. All the white wines typically have between 12.0 and 13.0% alcohol.

Cameron sources 3 vineyards in the Dundee Hills. All Pinot Noir is fermented with indigenous yeast and aged for nearly 2 years in a mixture of French oak barrels varying from new to neutral and bottled without filtration.

Both white and red wines are extremely age worthy and can last easily 10 years in a cool cellar.

Cameron wines are sold through selected retail outlets in Oregon.

12.1% alc., $40. · Moderately dark garnet color in the glass. A seductive nose offers scents of black cherry, dark red rose petal and toasty oak. The delightful cherry core is graced with captivating floral and spice tastes and a bit of oak-driven vanillin and herbs. Plush in texture with a very long and upbeat finish. Score: 93. Reviewed May 30, 2022 ARTICLE »

12.6% alc., $65. · Dark garnet color in the glass. A complex nose offers aromas of red cherry, cranberry, white pepper, and oregano. Red cherry and purple berry flavors have a marked savory undertone. Slightly creamy on the palate, with restrained tannins and bright acidity. Richer and riper fruited than the low ABV would suggest. Score: 92. Reviewed May 30, 2022 ARTICLE »

13.8% alc., $40. · Dark garnet color in the glass. Reserved perfume of purple and black berries and sous-bois. The riper fruit profile reflects this warm vintage. Mid-weight plus in style with flavors of black cherry, and purple and black berries with a savory herbal component. Silken in the mouth with a tannic edge and a hint of oak in the background. This wine is both fruity and savory. Score: 92. Reviewed May 30, 2022 ARTICLE »

12.6% alc., $40. · Moderately dark garnet color in the glass. Intriguing aromas of dark berries, mushrooms and wet earth. The succulent black raspberry and blackberry fruit flavors are accented with cardamom spice and oak. Mid-weight in richness with too much of an oak sheen for my taste. Unchanged when tasted the day after opening from a re-corked bottle. Score: 91. Reviewed May 30, 2022 ARTICLE » 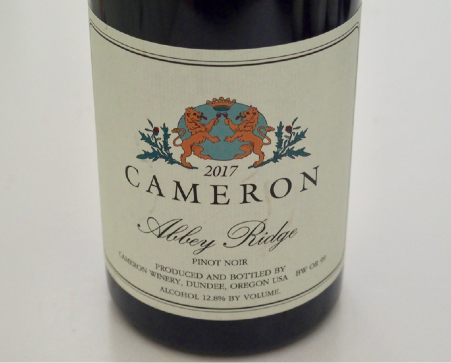 13.2% alc., $66. This winery is a member of deep roots coalition and practices sustainable viticulture techniques without irrigating. · A very savory wine with aromas of underbrush, peat moss and piquant herbs with a hint of blackberry. Soft and sleek in the mouth, with a mid weight plus core of purple and black berry fruits and a subtle thread of green bell pepper. Gentle tannins, with a long, fruity finish. More appealing when tasted the following day from a previously opened bottle. A wine for savory character enthusiasts. Score: 91. Reviewed July 8, 2019 ARTICLE »

12.9% alc., $19.50. A barrel fermented wine that is a blend of grapes from Clos Electrique and Abbey Ridge vineyards. · Moderately light golden yellow color and clear in the glass. Aromas of crusty lemon pie, lime peel and lees lead off. Smooth and slightly viscous in the mouth, with attractive flavors of lemon and green apple with very little oak in put. The flavors sneak up rather than shout out in this pleasant drink that is nicely balanced. Score: 89. Reviewed July 9, 2016 ARTICLE »

13.2% alc., $47. · Medium straw color in the glass. This is a really strange wine and perhaps I got an anomalous bottle. Aromas of yeasty bread, oak toast and peanut butter. Styled with piercing lemon drop acidity. Citrus-driven flavors with notes of oak-derived banana, toast, nuts and peanut butter. Leaves a lemony trail on the finish. This producerâs Chardonnay was recommended to me but I need to reserve judgement since I did not have a second bottle to sample. Reviewed November 24, 2012 ARTICLE »