One of the oldest wineries in the Napa Valley, Tulocay Wines was founded in 1974 by Bill Cadman. He has been making Coombsville (Haynes Vineyard) Pinot Noir since the winery's founding, but also produces Chardonnay, Cabernet Sauvignon, and from time to time, Syrah and Zinfandel.

Bill Cadman us a throwback to the time when Napa Valley was relatively quiet and an undeveloped agricultural area without all the luxurious wineries, hotels and restaurants. The Tulocay wines are not featured in the wine press since Bill refuses to submit his wines to the press for evaluation. Instead, he enters his wines in several competitions in California, where they earned numerous medals.

All of his wines are sold at the winery or by mail order to members of the Tulocay Wine Club. Rather than spending money and time on marketing, like the vintners of old Napa Valley, he prefers to establish a personal relationship with his customers.

As of 2017, much of the operation of the winery including winemaking duties have been turned over to his youngest daughter, Brie.

The winery is located just east of downtown Napa in the Coombsville AVA. Tastings include library wines and are $25 per person but require an appointment because the winery is so small. Visits can be set up by calling Bill in advance at 707-255-4064. 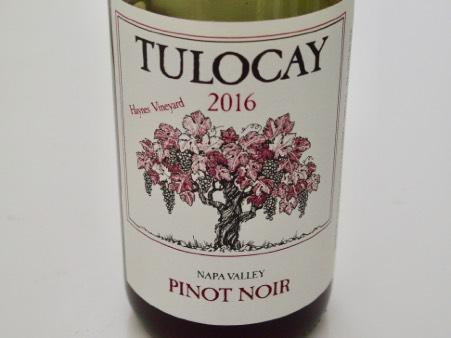 13.7% alc., 137 cases, $40. · Moderate garnet color in the glass. The nose is well-perfumed with aromas of red cherry, cardamom spice, and a hint of toasty oak. Very suave and easily drinkable in a middleweight style, featuring a delicious core of black cherry and raspberry fruit back by reserved tannins. This wine seduces rather than attacks the palate. The barrel treatment is spot on and the finish is impressively long and vivid. Still superb when tasted the following day from a previously opened and re-corked bottle. Reviewed August 2020. Score: 94. Reviewed August 22, 2021 ARTICLE »

13.9% alc., $28. · Moderate golden yellow color in the glass. Leading off are welcoming aromas of lemon oil, pineapple, marzipan, butterscotch and honey. Richly fruited in a mid weight plus style with a creamy texture and flavors of lemon, pineapple, toffee, and burnt caramel. There is plenty of goodness to wrap your arms around. Score: 92. Reviewed April 15, 2018 ARTICLE »

14.0% alc., $29. · Moderate garnet color in the glass. The barrel treatment dominates the strawberry and cooked cherry aromas with an overlay of toast and burnt tobacco. Light to mid weight in style with juicy flavors of blackberry and black raspberry framed by toasty oak. Vivid acidity brings the fruit to life and there is enviable finishing persistence, but there is a bit too much imposing oak that did not subside even after the bottle was open for several hours. Score: 88. Reviewed April 15, 2018 ARTICLE »