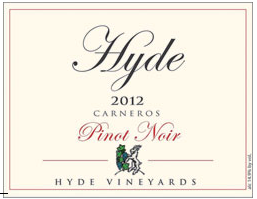 Launched in 2009, and initially known as Larry Hyde & Sons, the first release of Pinot Noir was from the same vintage and the vineyard under the same name. Larry Hyde has been in the wine business for over 35 years, and his sons grew up among the vines learning the art of viticulture from their father. Sons Peter and Christopher were involved in making wine from their early years, at first at home, and later on the professional level working at various wineries in California and France.

In 2014, the Hydes constructed a winery on a property they own at the intersection of Highway 12/121 and Los Carneros Avenue, but is used for custom crush.

An estate Carneros Pinot Noir and Chardonnay are offered. The wines may be purchased through e-mail (consult the website).

The Hyde family also has a partnership with the de Villaine family of Domaine Romanee-Conti, producing wines of HDV, or Hyde de Villaine.

14.9% alc., $65. · Moderate reddish purple color in the glass. Shy, but pleasant aromas of dark fruits, underbrush and seasoned oak. Full-bodied, fruit-centric, and quite ripe, with rich flavors of black plum, blackberry and cassis with an earthy, mushroom riff in the background. The texture is quite silky, the tannins are balanced, and there is some lingering and generous fruit on the finish. When tasted the following day from a previously opened and re-corked bottle, the wine was even more expressive on the nose and palate. Score: 91. Reviewed June 27, 2015 ARTICLE »