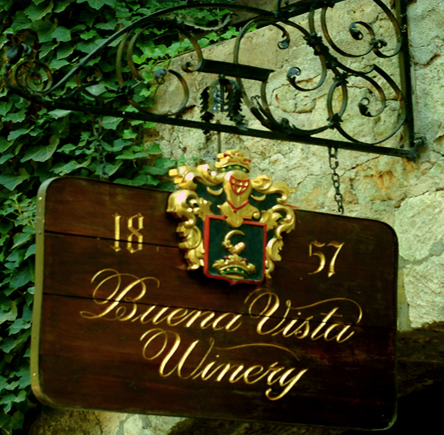 The story of Buena Vista stretches back to the 1850s when the winery's original founder, Hungarian immigrant "Count" Agoston Haraszthy, established the estate vineyards and built the winery in 1857. Haraszthy brought in hundreds of Vitis vinifera cuttings to California and is considered California's founding father of the state's wine industry.

The winery went bust in 1878, unable to survive the ravages of Phylloxera and weak sales. The estate was sold at auction and eventually passed on to the Catholic Church and finally the state of California. Following Prohibition, the property became an estate winery again under the ownership of the Batholomew family who bought it through an auction. The Bartholomews worked with André Tchelistcheff to release the first vintage in 1949 and produced wine from the estate until 1968, when they sold it to the founders of the distributor Young's Market. The German wine and spirits company A. Racke acquired the estate in 1979 and would eventually sell it to Allied-Domecq in 2000.

In the 1990s, Buena Vista, was turning out 300,000 cases of ho-hum wine. They certainly were not on the pinotphile’s radar. Their best wine had become a Sauvignon Blanc made from grapes in Lake County, not from the winery's extensive vineyard holdings in Carneros.

There began a dramatic remaking of the brand when the winery was acquired by Beam Wine Estates and then Ascentia Wine Estates who have contributed the corporate financial backing that has made it possible. The winemaking facility was built in the 1970s, one of the first wineries in Carneros. It was completely modernized and equipped with 62 5 to 10 ton open-top fermenters which were installed in the former barrel room. This gave the winery the capability to have all of the wine from the estate, which arrives usually over a two week period, fermenting in unison. The estate Ramal vineyard underwent replanting with different rootstocks and clones matched to suitable sites on the estate property. The East Ramal Vineyard had 3 to 9 year old vines of Chardonnay, Syrah, Pinot Gris, Merlot, and Pinot Noir. The West portion of Ramal Vineyard is mostly all new plantings, expected to deliver fruit in 2006 for the first time. Here there is Chardonnay, Merlot, Syrah, and Pinot Noir. Pommard is the workhorse clone here with other clones adding interest such as 115 (spice), 667 (structure), 777, 828, 583 (cherry) and Swan. They all contribute something to the mix. There are a total of 167 different blocks on the property, in essence, many different small vineyards within a large vineyard. Out of a total of 1,000 acres, 800 are planted or replanted and the last phases of replanting was completed in 2008. Sophisticated viticulture technology was instituted including airplane-view (called “Vine View”) infrared mapping of vine vigor which can be used to guide irrigation.

Winemaker Jeff Stewart arrived at Buena Vista in 2003 after crafting cool-climate varietals at La Crema Winery in the Russian River Valley for five vintages. Prior to that, he made wine at Robert Keenan, Laurier, De Loach, Mark West and Kunde. Noted winemaker Chuck Ortman was one of his earliest mentors. Jeff is like a big friendly bear - a burly guy with a winning smile and an unrelenting enthusiasm for his work. His mantra is balance and he says, “As with many winemakers, I believe in balance, both in the vineyard and in the wines. I like to see power and elegance working together.” In early 2004, management made the decision to discontinue the previous California Classic and Grand Reserve lines of wines, and reduce production to 45,000 cases. The two new lines of wines included: The Carneros Series, varietal bottlings of Chardonnay, Merlot, Pinot Noir and Syrah ($19-$21) and The Estate Vineyard Series (EVS) of limited release wines featuring select clonal material and/or blocks from the property ($37). New packaging and labeling created a modern and sophisticated tone.

The winery changed corporate ownership five times between 2000 and 2011. In early 2011, it was announced the winery was in significant financial difficulties, and the winery was acquired in May 2011 by Boisset Family Estates Collection. Jean-Charles Boisset is returning Buena Vista to its original glory with a complete restoration and re-opening of the Champagne Cellars building that included, working winemaking equipment, a barrel cave, a Bubble Lounge, and museum of winemaking equipment, and the larger of the two buildings known as the Press House, an 1862 former press room that contains the tasting room. The renovated buildings were unveiled in a 200th birthday celebration. These buildings had been unavailable to the public for over 20 years. Fortunately the restoration was completed before the Napa earthquake in 2014 and the old buildings survived intact. The wine production facility in Carneros also received a makeover.

Boisset will continue to focus on the same varietals and has secured long-term contracts for the Ramal Vineyard Estate in Carneros perpetuating the estate-driven philosophy that guided Buena Vista to prominence. Besides Pinot Noir, Chardonnay and Merlot, for which the winery has become known for in recent years, new varietals will be added, a line of high-end wines will be offered, and a sparkling wine will be produced. The lineup will include several tier designations: "Sonoma" (multiple varietals), "Carneros" (Chardonnay, Pinot Noir, Merlot, Syrah and Sparkling Brut), "Private Reserve" (Chardonnay, Pinot Noir, Cabernet Sauvignon, and Zinfandel), and "Viticultural Society" (multiple, limited, unique bottlings of Chardonnay, Pinot Meunier, Pinot Noir and Zinfandel only available at the winery).

In early 2012, a "Taste with the Count" experience was added where a costumed gentleman decked out in clothes reminiscent of those of founder Agoston Haraszthy of the 19th century. He leads visitors on a 45-minute tour into the cellars, followed by a tasting.

Winemaker Jeff Stewart left to become winemaker at Hartford Family Winery. Brian Maloney, who makes the DeLoach wines, oversees the 42,000 case production with the help of winemaker consultant David Ramey. A full-time cellar master, Adrian Ochoa, works onsite throughout the year. The Private Reserve wines are produced at the historic winery. Total production will be about 54,000 cases annually.

14.5% alc., pH 3.60, TA 0.54, 2,995 cases, $25. Cellared and bottled by Buena Vista Winery, Santa Rosa and St. Helena. 100% de-stemmed, fermented in small open-top fermenters, and aged for 10 months in French and Hungarian oak barrels, 20% new. · Moderate reddish purple color in the glass. The nose is dominated by oak, revealing aromas of fresh ground coffee beans and toast. Smooth in the mouth with a mid weight core of black cherry fruit that plays second fiddle to conspicuous oak. The silky tannins and acidity are in favorable balance with the fruit, but the experience is like drinking a cold cup of coffee with cherry flavoring. Score: 82. Reviewed February 13, 2017 ARTICLE »

14.3% alc., pH 3.66, 4,047 cases, $38. · Moderately deep reddish-purple color in the glass. Enticing aromas of earth-kissed dark berries and cherries with hints of cola, roasted nuts and mushrooms coming and going. Juicy core of raspberry and blackberry fruit with a nod to ripeness with an undertone of root beer and currants. Nicely composed with soft-grain tannins. Very good. Reviewed December 16, 2009 ARTICLE »

14.3% alc., pH 3.66, 4,047 cases, $38. Clones 115, 667, 777, 828, Pommard 5 and Swan. Grapes were de-stemmed, cold soaked 5 to 8 days, fermentation in 5- and 7-ton open-top fermenters, aged in 39% new French oak. · Moderately dark reddish-purple color. The nose really draws you in with aromas of ripe black cherries, vanilla, and a woodsy tone of forest floor and mushrooms. Discreetly concentrated cherry and berry flavors with some pomegranate, earth and oak toast in the background. Tangy and smooth on the finish leaving a pleasant impression of fresh cherries. Very good. Reviewed October 29, 2009 ARTICLE »

13.5% alc., 25,295 cases, $23. Winemaker Jeff Stewart can draw from a dozen clones among 40 individual blocks. · This is a delightful cherry-driven wine with a nice touch of spice. Elegant and harmonious with a crisp and fruity finish, this is a terrific wine for the price. This wine is not a Big Boy, but structured for easy drinking with and without food. Many Pinot Noirs at this price point just donât deliver the goods, but this one hits all the right notes. Reviewed November 12, 2007 ARTICLE »

13.5% alc., $25. · A light style of Pinot Noir that takes on a fuller structure with time in the glass. Attractive cherry, toast and smoke notes are featured in the aromas and flavors. A thoroughly satisfying daily drinker. Reviewed March 19, 2007 ARTICLE »

14.3% alc., $42. · A elegant Pinot Noir that is beautifully weighted. It rolls over the tongue like silk. Red and black stone fruits are featured with plenty of Asian spice. The balance is impeccable and the finish urges you to take another sip. The sensuality of Pinot Noir can be found here. Reviewed March 19, 2007 ARTICLE »

14.2% alc., $42. · The nose reminds one of freshly baked cherry pie but is rather closed at this time. There are interesting spice elements underlying the Pinot fruits. The wine is rather closed and not offering all of its potential charm. Some cellar time is necessary. Reviewed March 19, 2007 ARTICLE »

$42. Californiaâs first premium winery, Buena Vista Carneros, is the largest landholder in the Carneros appellation. The winery has made significant capital investments in winemaking equipment and viticulture, such as 60 new open top fermentors and careful replanting of 800 acres. Winemaker Jeff Stewart has been brought in to steer the ship and his wines are bringing Buena Vista back to respectability. Website: www.buenavistacarneros.com. · Rigorous but well composed flavors of dank earth, dark black cherries and dark caramel glaze. Sturdy, full and long. Reviewed August 6, 2007 ARTICLE »

13.5% alc. 14,000 cases, $23. · An elegant style that is driven by cherries and strawberries in the nose and flavors. A little smokiness and herbs add interest to the nose and finish. This wine has a fairly rich mouth feel. With air time, the wine becomes quite silky and more fruity. Reviewed March 19, 2007 ARTICLE »