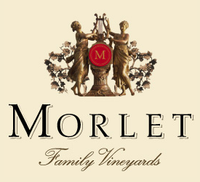 Luc Morlet grew up working on his family’s domaine, Pierre Morlet & Fils, in Avenay-al-d’Or, Champagne. His father, Pierre, is apart of a fifth generation winegrower family. Luc worked in Champagne, Burgundy and Bordeaux before moving to the Napa Valley in 1994 where he worked at Newton Vineyard. Five years later, Luc was hired as head winemaker at Peter Michael Winery where he worked from 2000 to 2005. In 2005, his brother, Nick Morlet replaced him at Peter Michael, and he embarked on his own label in 2006 with his wife Jodie.

Luc's winemaking approach is New World, crafting wines less in the French style and more in the California rich and intense mode. At Morlet Family Vineyards, he started with Pinot Noir, Chardonnay, Syrah and a white Bordeaux blend, then added Cabernet - some of it from Napa and some from his own property in Knights Valley and a Cabernet Franc. He also began producing a late-harvest Semillon, particularly for wine dinners, where they serve their family's Morlet Champagne as an aperitif.

In 2010, the Morlets sold their house and bought two adjacent parcels totaling 12 acres north of St. Helena. The property had been the home to an 1880 stone winery built by German immigrant William Castner. A Victorian farmhouse and 2 acres of Cabernet Sauvignon vines remain from what was originally a 35-acre vineyard. The property is located in the vicinity of Grace Family, Vineyard 29 and Colgin's Tychson Hill Vineyard. The Morlets bought the winery from Bryant Morris, who had the Flying Horse Winery brand and was working on restoring the ghost winery. Luc and Jodie set out to return the old winery to its original use, renovating it for structural integrity and modern needs while retaining the historic character.

No expense is spared in the crafting of his Pinot Noirs. He sources fruit from carefully situated vineyards in he Sonoma Coast, all hand picked and sorted. Following hand sorting, he uses a special machine he patented called “The Sorter” to further select out only the finest berries. The wines are coopered in 100% French oak and bottled in very heavy glass with long, expensive corks. Morlet’s wines are known for their superb aromatics and he has been called “an olfactory genius.”

The wines are sold through a mailing list which as of 2014 had a waiting list. Tours and tastings are available on a limited basis by appointment only ($100 tasting fee for non-members of mailing list, waived with the purchase of six bottles at the conclusion of the tasting).

14.5% alc., $59. From a hillside vineyard (Coteau) on an eastern slope (Cote) on the second ridge from the Pacific Ocean (Eaux). The Nobles family have farmed this land for four generations. The name then is Nobles Hillsides or Coteaux Nobles. Luc Morlet winemaker and proprietor. · Moderately dark reddish-purple color in the glass. Highly aromatic, offering inspirational aromas of fresh boysenberries and seasoned oak. Reasonably concentrated and quite delicious, with virile flavors of black cherries, black cherries and boysenberries. Beautifully put together with silky tannins and a lingering finish. Highly charming on the palate now, but could use more time in bottle for the aromas to catch up to the flavors. Score: 95. Reviewed August 14, 2013 ARTICLE »

14.5% alc., $75. · Deep reddish-purple color in the glass. Aromas of spiced plums, plum sauce, spice, sweet smoke and lacquered wood. Soft in the mouth with a moderately rich core of darker stone and berry fruits with a smoky edge. Beautifully crafted with very pretty fruit, but the smokiness, although tending to dissipate over time in the glass, spoils the experience. One bottle tasted was Decent. One bottle tasted was Good. Reviewed June 22, 2010 ARTICLE »

14.5% alc., $85. This bottling is dedicated to grandparents, parents and relatives. · Moderately dark reddish-purple in the glass. Complex array of scents including black cherries, raspberries, spice fennel, redwood, smoke, ash and cigar box. The most delicate of the three bottlings with a demure sweet-fruited palate with a satiny mouth feel. Subtle flavors of smoke, tobacco and burnt rubber. Tasted twice. Decent. Reviewed June 22, 2010 ARTICLE »

14.5% alc., $85. Sourced from the best section of the Coteaux Nobles hillside vineyard on the second ridge from the Pacific Ocean. The name refers to a beautiful (Joli) plot art the center of the ranch or its heart (Coeur). · Deep and intense aromas of black cherries, black raspberries and rose petals with a hint of smoke. Discreetly concentrated core of dark stone and berry fruits with an underlying mineral and smoky edge. The velvety texture is quite alluring. The smoky note tends to dissipate with time in the glass. Good. Reviewed June 22, 2010 ARTICLE »

360 cases, $70. From a vineyard on the second ridge from the Pacific Ocean. Dedicated to Luc Morletâs spouse, Jodie, and named âMy Sweetâ or âMa Douce.â Native yeast, 100% MLF, weekly batonnage. Unfiltered. · Moderately deep straw yellow color in the glass. Piercing aromas of lemon curd, yeast, roasted nuts and smoky oak. Plush and luxurious on the palate, yet vibrant with acidity and minerality. Enticing flavors of white peach and buttered brioche linger on the refreshing finish. A very impressive wine that was still pumping out bright flavor three days later from an opened, re-corked and non-refrigerated bottle. Decant this wine if you pop the cork now. One of the greatest California Chardonnays to cross my lips. Sold out at the winery and understandably so. Still available through retail channels on the internet. Reviewed May 24, 2010 ARTICLE »

14.5% alc., 350 cases, $75. · Sexy and generous aromas of black raspberry jam with an oak veil. Darkly fruited, slightly jammy blackberry and black cherry fruit with a little earth and mineral streak. Juicy, succulent and richly layered, this Pinot Noir is a decadent example of the varietal that will find many fans. Reviewed February 18, 2008 ARTICLE »

14.5% alc., 100 cases, $85. · Like all three wines, this one is dark purple in color. A sappy aromatic core with a hint of heat. Packed with raspberry and cherry fruit that is muscular but not harsh, flamboyant but not over the top. Svelte tannins and a vivid, lengthy finish. Reviewed February 18, 2008 ARTICLE »

14.5% alc., 100 cases, $90. · Starts off with a gorgeous nose of fresh blackberry pie. There are layers of plush, soft and mouth-filling black cherry and blackberry fruit, complimented by tobacco, game, and forest floor. Deft oak lurks in the background. The fruit lingers on the finish for an eternity. Of the three wines, the fruit is showier here and if I had to choose, this would be my pick of the litter. This wine is for lovers of a hedonistic full-throttle style of Pinot Noir that startles with sensual pinotosity. Reviewed February 18, 2008 ARTICLE »