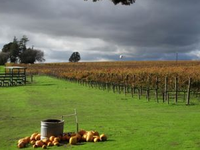 The name Adastra is taken from the Latin saying per aspera ad astra, "through striving to the stars." Family owned, Adastra is run by Naomi and Chris Thorpe and son-in-law Edwin Richards, and features wines from Adastra Vineyards. Pam Starr has been the winemaking consultant since 1997.

The Thorpes bought the 33-acre Carneros ranch that became Adastra in 1984. Adastra Vineyards was established in 1989, returning vines to the Carneros property for the first time since Prohibition. 6 acres of Pinot Noir (Swan, Pommard, Wädenswil, Dijon 113 and 115), 7 acres of Chardonnay and 7 acres of Merlot are planted. Adastra's vineyards are certified by the California Certified Organic Farmers (CCOF).

All the Pinot Noir was sold to Etude beginning in 1997, but a small amount was withheld in 2002 to launch the Adastra label. Talisman has sourced grapes in recent years.

Adastra is open for private tours by appointment.

14.9% alc., pH 3.65, TA 0.61, $45. Produced and bottled by Adastra Verrerie, Sonoma, CA. Made from organic grapes. Clones are âDRC,â Swan, Pommard, 115 and 777. Extended 44-45 day maceration. Aged 16 months in French oak barrels, 20% new. · Very reserved aromas of blackberry jam on a toasted muffin. Full-bodied, with a big gulp of very ripe fruit flavors of blackberry, raisin, and cassis framed by toasty oak and energetic tannins. Velvety in texture with a fruit-packed finish. A bit tiring to imbibe. A slight sense of alcoholic warmth shows up as the wine warms in the glass. A Cabernet loverâs Pinot. Unchanged when sampled the following day from a previously opened bottle. Score: 89. Reviewed May 16, 2021 ARTICLE »