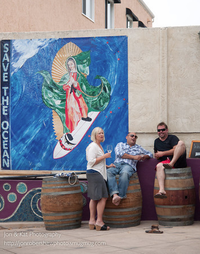 An urban San Diego winery featuring small lots of wines sourced from growing regions in Northern and Central California. Grapes are crushed, pressed, fermented, barreled, aged and bottled in an urban facility just a few blocks from the ocean in Solana Beach.

The owner and winemaker is Adam Carruth, a native of San Diego County who lived in North County much of his life. He studied viticulture at Santa Rosa Community College after college and began making wine. He moved back to Carlsbad in 2001 and began trucking grapes down from Northern California. In 2006, he transitioned to a professional winery operation. 2012 marks his 16th crush.

A tasting room is located in the heart of Solana Beach tucked behind a row of shops in Cedros Avenue's busy design district. A new location in Point Loma's historic former naval base, Liberty Station, was scheduled for opening in 2013.