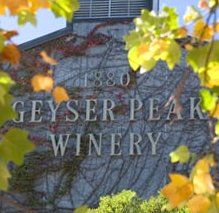 One of California's oldest wineries, GeyserPeak was founded in 1880 by Augustus Quitzow, one of Sonoma County's pioneer winemakers. The original winery was bonded as the twenty-ninth winery established in the state of California.

The original winery was built in Geyserville in the Alexander Valley in 1882. In 2014, the iconic winery moved its tasting room and winery operations to a newly renovated facility on Westside Road, just minutes outside of downtown Healdsburg at the confluence of Dry Creek Valley and Russian River Valley (formerly known as Alderbrook Winery). Limited-release and winery-exclusive wines will be produced at this facility.

The winemaker is Ondine Chattan who has been with the winery since 1999. She created two proprietary red blends for release in 2014, Tectonic and Devil's Inkstand, along with a Russian River Valley Pinot Noir, Pluto's Fury. The winery is best known for Sauvignon Blanc and Cabernet Sauvignon

The tasting room is open daily.

14.4% alc., pH 3.55, TA 0.60, 500 cases, $28. Plutoâs Fury takes its name from one of the historic geysers that dot the landscape around the winery. Historically, the geysers were located in an area of mineral wealth and were given colorful names derived from Greek mythology, stemming from the belief that mineral wealth originated in the domain of Pluto. Winemaker Ondine Chattan. Aged 11 months in 100% new French oak barrels. · Moderately light reddish purple color in the glass. Appealing aromas of cherry, brown spice, mushroom and sweet oak. A lighter weight, easy drinking wine that is soft and silky in the mouth. The flavors of cherry, strawberry and oak spice are enjoyable, and there is commendable harmony. The finish is pleasant but not remarkably long. A solid wine for the daily table. Score: 88. Reviewed April 19, 2014 ARTICLE »