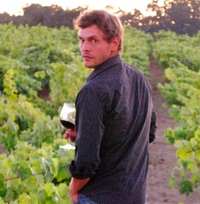 Joe Swick, a native Oregonian, has made wine in many international and domestic wine regions since 2003 (see the website for his impressive resume). He has crafted wine at Owen Roe with David O'Reilly, Sineann, Penner-Ash, Domaine Serene, Siduri, Kosta-Browne, Villa Maria and Felton Road in New Zealand

Swick's first commercial Oregon wines appeared from the 2013 vintage under the Swick Wines label. He crafts his wines in the Medici Winery above Newberg.