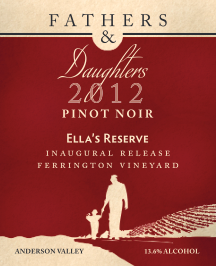 On Father’s Day, Father’s & Daughters Cellars released its first two wines - a 2012 Ella’s Reserve Pinot Noir and a 2013 Sauvignon Blanc from Ferrington Vineyard. Production will be between 60 to 100 cases of each varietal and are primarily through a mailing list or by ordering online through the website.

The label represents the collaborative effort of three generations of fathers and daughters: Patriarch Kurt Schoeneman, his daughter Sarah, Sarah’s spouse Guy Pacurar, their daughter, Ella, and Guy’s older daughter, Taylor. While lauded wineries like Williams Selyem, Schramsberg, Flowers and Arista have produced wines from Ferrington fruit, the family has never created and bottled a wine for sale under their own label until now.

The wines were first poured at this year’s Anderson Valley Pinot Noir Festival and the LA Winefest. Subsequent releases will include a 2014 Chardonnay and a 2015 Gewüztraminer from the Ferrington Vineyard.