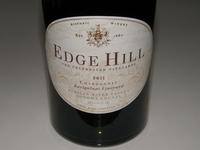 Edge Hill was established in 1867, and was the first gravity-fed winery built in Napa Valley. By 1880, it was one of the four wineries responsible for over half of Napa Valley's wine production. Edge Hill was owned by a series of visionaries including Louis and Elizabeth Martini who owned it from 1952 to 2000. In 1999, this legacy inspired Edge Hill's new steward, Leslie Rudd, to begin the historic preservation of the estate, and return Edge Hill to the prominence it had in the 19th century.

Over the past 15 years, the distillery building, entrance, vineyards and grounds have been restored and the winery building is currently being meticulously restored with the help of renowned architect Howard Backen.

The Winemaker and Estate Manager is Anthony Weytjens who focuses solely on Edge Hill wines. The wines were previously made at Rudd. Anthony dropped out of law school to pursue his winemaking passion and received a degree in Biology from the University of Bordeaux and a Masters in Viticulture & Winemaking. He finished his Masters with Dominus Estate.

The winery's vision is to produce the highest quality wines from the most interesting heritage vineyard sites. The wines are sold on a first-come, first-served basis to mailing list customers.

14.3% alc., 414 cases, $115. Allocated to mailing list members. Fermented and aged in French oak barrels. · Light golden yellow color in the glass. This is a sensual wine with a perfume of cut yellow apple, honey, lemon oil and toasty oak. Round and polished on the palate, the uplifting flavors of lemon, white peach, apple are embellished with oak seasoning. Impeccably balanced, and thoroughly satisfying, previously hidden nuances seem to appear with each sip. Even better the following day from a previously opened and re-corked bottle. I believe this is easily a 15-year wine. Score: 97. Reviewed June 27, 2015 ARTICLE »