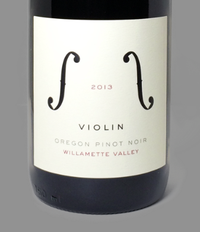 This winery was started by Will Hamilton in 2013 with a focus on Willamette Valley Pinot Noir produced from sourced grapes of five vineyards of friends and growers. The name Violin, is as much a mood as a brand name for Will. He says, "I have chosen a beautiful word that resembles the words 'vino' and "wine." It also includes his son's name, "Olin." The repetition of the 'n' sound is ever-present in the phrase, 'Violin Wine Oregon Pinot Noir.' His goal is to make wine that is long and elegant without hard edges, leaving a lingering feeling of beauty to ponder happily, and wanting to come back for more. The logo displays the 'F-Hole' design that is found on handcrafted string instruments and is a beautifully balanced, elegant and universally recognized image."

Will's first window into fine wine occurred at the age of 18 when he became a server. He continued to work as a server during college, and found a special interest in the wines of Oregon when he was in his early twenties. He applied for summer work in the Willamette Valley as early as his junior year of college, and had to turn down harvest opportunities to finish his degree in English literature at the University of the South in Tennessee.

After college, he found a sales position with William Harrison Imports, an importer of French wines based in Northern Virginia. His passion, however, was in wine production, and he moved to Oregon in August 2005, finding a harvest position with Erath Vineyards & Winery. The following January, he began working for Northwest Wine Company and Solena Cellars. He eventually worked as cellar master and later assistant winemaker along side winemaker Laurent Montalieu.

During his five+ years with Laurent, he executed winemaking for several prominent Oregon brands, networked with Oregon and Washington growers, and took coursework in the science of winemaking. Will developed a special taste for wines from the Eola-Amity Hills AVA. He was able to vinify multiple different varietals, but his passion always remained with Pinot Noir.

Will left Laurent in 2011 to join a mobile filtration company and worked harvest at Evening Land Vineyards. The next three years, he worked with big and small producers throughout the Northwest and decided to launch his own brand. He was able to contract fruit from five vineyards, two of which are in the Eola-Amity Hills.

Will is also the Oregon and Washington representative for Diam closures. He plans to grow Violin to 1500 cases eventually.

13.2% alc., $45. Small production Pinot Noir from Will Hamilton starting with this vintage. Sunny Mountain Vineyard was planted and is farmed by industry veteran Steve Price. It is located in the southern Willamette Valley, hear Broadley Vineyards in Monroe. One of a handful of producers making designated wines from this vineyard. · Moderately light cherry red color in the glass. Demure aromas of red fruits and wood spice lead to a medium-bodied wine with an enjoyable array of red berry and cherry flavors framed by dusty tannins. Very forward, elegant and quite appealing now, with a forthright attack and finish. Score: 90. Reviewed December 12, 2015 ARTICLE »