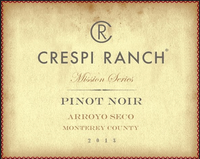 Crespi Ranch is one of the labels under the Bronco Wine Company USA umbrella.

Father Juan Crespi (1721-1782) was a Spanish missionary and explorer of early California. He founded the Mission San Carlos Borromeo de Carmelo, in the present-day Carmel. His published diaries provide valuable records of early expeditions of California.

The winemaker is Richard Grant Peterson, PhD. He joined E. & J. Gallo Winery in new product development in 1958 after obtaining a PhD in Agricultural Chemistry from University of California, Berkeley. From 1968 through 1973, he replaced Andre Tchelistcheff as winemaker at Beaulieu Vineyards in the Napa Valley. Subsequently, he was the winemaker and president of The Monterey Vineyard. From 1986 through 1990, he was the winemaker and president of Atlas Peak Vineyards. Here he pioneered California's largest Sangiovese planting to date. With other investors, he acquired Folie a Deux Winery which was sold to Trinchero in 2004. Today, he is a viticulture and enology consultant for several small wineries as well as the winemaker for Crespi Ranch Cellars and Richard Grant Wines.