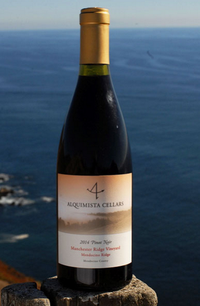 Alquimista ("Al-kuh-mis'-tah") is the Spanish word for alchemist, an appropriate name for La Follette who is a former seminarian and biochemist with degrees in Plant Biology and Chemistry. La Follette designed and redesigned fourteen wineries worldwide and was the consulting winemaker for UC Davis' teaching winery.

Patrick Dillion, the co-winemaker for Alquimista Cellars, is a Pulitzer Prize winning journalist, writer, author, editor, web content director and strategic consultant. In 2000, he and his wife Anne bought a small farm in Sonoma County where he met Eric Sussman of Radio Coteau Winery. Patrick provided sweat equity for Eric. He went on to work with Miramar Torres and later ADAMVS, the high-end Cabernet Sauvignon producer in Napa Valley. Patrick first worked with Greg during the harvest of 2011 and their friendship became the antecedent for Alquimista Cellars.

In 2014, Chardonnay and Pinot Noir are offered from Manchester Ridge Vineyard and Pinot Noir from Van der Kamp Vineyard. The wines are produced at a converted apple processing plant in Sebastopol, CA. Visit the website to purchase the wines.