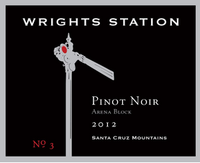 This Santa Cruz Mountains winery is located at 1,800 feet elevation along the summit, halfway between Santa Cruz and Los Gatos. The winery focuses on estate grown Pinot Noir and Chardonnay along with other varietals sourced from local vineyards.

Originally planted in 1981, the Chardonnay is some of the oldest in the region. The Wente clone 4 is planted to AXR rootstock and has avoided phylloxera. Pinot Noir was planted in 2000 and 2001 with Dijon clones 667 and 777 predominantly along with some Pommard. The new plantings are on 101-14 rootstock and the remainder is grafted onto aged Chardonnay rootstock.

The location was historically named after James Richards Wright, the owner of a large parcel of land adjacent the site where workers bored the 1.2-mile Summit Tunnel through the mountains beginning in 1877. Most of the railroad workers were Chinese and were housed at Wrights Station. The new Wrights Station Vineyard & Winery sits above the site where the station and town stood. Further interesting history is available on the website.

The winemaker is owner Dan Lokteff who previously was the winemaker at Storrs Winery in Santa Cruz.

The tasting room at 24250 Loma Prieta Avenue in Los Gatos (just past Burrell School) is open Friday through Sunday.