In 1973, John and Beth Hiestand planted own-rooted Wädenswil 1A clone from the South Block of Eyrie Vineyards acquired from David Lett. The cuttings were rooted next to the barn on the property and planted the following year.

In 1979, Bill Beran, a physicist planted the bulk of the vineyard, 7 acres, to own-rooted Pommard, Riesling and Chardonnay. The white wine vines were grafted to Dijon 115 Pinot Noir in 1990. Organically farmed from the beginning, the vineyard was planted on Laurelhurst (Laurelwood) soil, a combination of Jory and Willakenzie soil types. Bill and Sharon Beran converted the diary barn to a winery and launched Beran Vineyards & Winery with their first vintage in 1997.

The property was first homesteaded in 1875 by John McFee. Abijah Hendricks homesteaded a parcel of land near Carlton, Oregon after arriving on a wagon train in 1843. In 2012, his great-great grandson, Stephen Hendricks, a lawyer and fifth generation Oregonian, returned to his roots in the Willamette Valley, acquiring the Beran Estate Vineyard and winery and establishing Ruby Vineyard. Currently the vineyard has 7.5 acres of old vine Pinot Noir dating to 1973-1979 and 1.8 acres of newly planted vines (cuttings of Wädenswil 1A taken from old plantings and 3 Dijon clones of Chardonnay).

Winemaking at Ruby since the 2016 vintage is under the direction of consulting winemaker Eric Hamacher and assistant winemaker Andrew Kirkland. Eric has 22 vintages under his belt in Oregon, 12 of those at Carlton Winemaker’s Studio. Andrew worked in wine retail in Seattle and New York and was exposed to many great wines. His recent winemaking experience came at Brittan Vineyards.

Current capacity is 3,500-4,000 cases per year. Current wines offered include Chardonnay, Rosé of Pinot Gris, and four 2015 Pinot Noirs. I tasted through the 2015 Pinot Noirs in the tasting room with Eric and Andrew and then barrel tasted several 2016 Pinot Noirs in the winery. It is clear that this winemaking team is enthusiastic about the potential of this iconic vineyard and the 2016 wines will be special.

The tasting room at Ruby is open six days a week (closed Tuesdays) with private tastings available with the owner or winemakers by appointment. The historic winery retains its dairy farm roots while a new, modern tasting room has been added nearby. 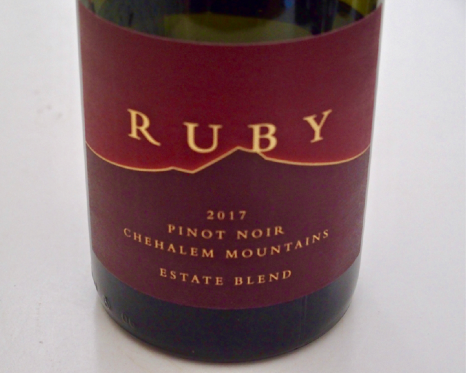 13.3% alc., $50. Sourced from own-rooted vines planted in 1979 (Pommard), and WÃ¤denswil and Dijon 115 clones. Indigenous yeast fermentation. · Light garnet color in the glass. Plenty of cherry pie goodness on the nose soaring over time. Vibrant cherry and raspberry fruit flavors with integrated tannins, a silky mouthfeel, a touch of oak and a very satisfying finish. A real cherry delight. Score: 93. Reviewed May 28, 2022 ARTICLE »

alc., $125. Own-rooted WÃ¤denswil 1A vines dating to 1973. 100% de-stemmed, native yeast fermentation, aged 10 months in neutral French barriques and puncheons. · Light garnet color in the glass. Delicate aromas of cherry, strawberry, sous-bois, graham and cardamom building in intensity over time in the glass. My notes say âamazing nose.â Considerably more power and palate presence than the light color would suggest. Replete with cherry goodness married to gossamer tannins. More elegant and lacy than the Estate Blend, with an extremely long, and I mean long, finish. Score: 96. Reviewed May 28, 2022 ARTICLE »