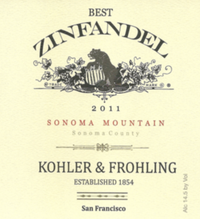 One of California's oldest wineries, established in 1854, had a winemaking facility in what is now Jack London State Historic Park. The ruins of that winery have been home to Transcendence Theater Company's "Broadway Under the Stars" shows since 2011.

At its peak, the winery was a household name nationwide, but Prohibition caused it to close its doors.

Today, Bert Sandman, the great-great-grandson of Charles Kohler (partner with John Frohling) decided to recreate the business. He hopes to slowly grow the label and preserve Kohler's legacy. Sandman has partnered with winemaker Jim Mirowski, co-founder and winemaker at Treasure Island Wines.

The initial releases were a 2011 Sonoma Mountain Zinfandel and 2017 Pine Mountain-Cloverdale Peak Sauvignon Blanc. In 2019, releases will include a Pinot Noir sourced from Balletto Vineyards. Planned growth is to 3,000 to 4,000 cases by the early 2020s.