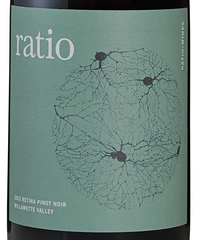 Owner Anthony King has an interesting resume. He attended Grinnell College in Iowa and studied physics, later working on textbooks starting with a high school physics textbook. He eventually entered into wine working in a wine shop, writing about wine, volunteering in vineyards and wineries and finally interning in Napa under Michael Terrien at Acacia Winery. He attended UC Davis where he studied tannins and color in Pinot Noir with Doug Adams.

In 2006, Anthony moved to Oregon and spent eight years at Lemelson Vineyards, eventually leaving for a consulting career. He has ten clients as of 2018, including the Carlton Winemakers Studio where he is General Manager.

Anthony named the winery Ratio to honor his father who attended MIT and was a pathologist but a mathematician at heart. Ratio reflects the Latin meaning, "to reason," and the never-ending pursuit of perfection.