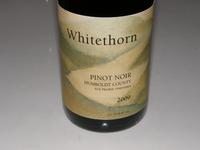 Southern Humboldt County in California seems like another very unlikely place to find an accomplished Pinot Noir winegrower and winemaker. Whitethorn is a small community in the southern-most reaches of Humboldt County (so-called “so-hum”). This is where Tasha McCorkle McKee and her Whitethorn Winery can be found.

Tasha was raised in Whitethorn on her great-grandfather’s homestead since the age of 2. She quit high school at age 15, and learned the carpentry business from her father, working with him until she was 20. At a young age, she developed a curiosity about wine, and made wine out of rose petals, elderberries and blackberries. She acquired books on winemaking but did not understand the chemistry involved, so she moved in with her sister who was attending San Francisco City College. Here she worked days and took night classes in chemistry. After seven years, she attended the University of California at Davis and graduated with a degree in fermentation science. Remarkably, she was awarded highest honors, not an easy feat considering she did not graduate from high school.

Her first job after schooling was as a cellar hand at Trefethen Vineyards. The winery was reluctant to hire her as she was quite petite and they were uncertain that she could meet the physical demands of the job. That is where her construction work background came in handy, and she proved her worth. Two years later she moved on to Simi Winery, where she was fortunate to work under noted winemaker Zelma Long. Eventually she was promoted to associated winemaker. She was working long hours and commuting 50 miles a day. As she longed to spend more time with her husband and new son, she moved back to Whitethorn to start her own winery. With the assistance of her father and Joe and Maggie Collins of nearby Briceland Winery, she started Whitethorn Winery in a construction yard building.

By 1998, she had increased production of several varietals from multiple vineyard sources to 1,300 cases per year. She was producing superb Chardonnays and Pinot Noirs sourced from Hyde Vineyard in Carneros and Hirsch Vineyard on the Sonoma Coast. Some personal and lifestyle issues intervened five years ago, and the last Pinot Noirs she made were the 2002 Hyde Vineyard and 2002 Hirsch Vineyard. When I spoke with her last year, she planned to resume her winery sourcing grapes from Demuth Vineyard in the Anderson Valley and Hyde Vineyard once again.

2015 update. Tasha's son, Galen, has taken over operations of the winery.

Whitethorn wines are available primarily in San Francisco Bay Area fine restaurants and retail stores. She does not release her wines until she considers them ready to drink. The winery is about two hours north of the Anderson Valley. The winery is open by appointment (707-986-1658). Two annual open houses are held Thanksgiving and Memorial Day weekends. 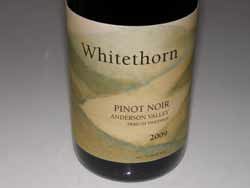 13.9% alc., $40. · Ripe fruit aromas and mid weight plus, sappy flavors of black cherry, black raspberry and cassis are featured. Lovely fruit, which stars on the generous finish, but is somewhat buried by muscular tannins. Need a big ribeye steak for this one. Score: 89. Reviewed February 8, 2015 ARTICLE »

14.9% alc., $34. · Initially the aromatic profile include cherries, leather glove and seasoned oak. With time, herb garden takes over. Flavors of ripe berries, root beer and some citrus peel in the background. The tannins have melted away and there is good persistence on the finish which is a touch hot. Reviewed June 16, 2009 ARTICLE »

14.9% alc., $27. · This wine needs a little time to show its charms. The perfume is quite floral and cherry-driven with a hint of alcohol. Dark cherry flavors are at the core, but other tastes come in and out like carob, cassis, and soy. The wine is fat in the mouth with a rich, warm texture. There is plenty of lively acidity for the dining table. Excellent! Reviewed April 9, 2007 ARTICLE »

14.9% alc., $27. · Moderate reddish purple color in the glass: still bright in color with no bricking. Primary black cherry fruit aromas persist along with secondary aromas of cigar box, black tea leaves and old trunk. Very tasty black cherry and raspberry fruits that veer to the ripe side with a hint of tobacco and tea in the background. A delightful aged California Pinot Noir with merged tannins, and a long, juicy finish. Score: 90. Reviewed February 8, 2015 ARTICLE »

15.0% alc., $50. · Give this wine at least an hour to open up. It shows the feminine side of the Hirsch Vineyard. There is remarkable balance here for a wine of 15% alcohol. The tannins are thoroughly tamed and the mouth feel is warm, soft, and cozy. A sweet cherry nose leads to a palate of generous red and dark fruits and a solid acid spine. You will need a cold soak after drinking this one. Reviewed April 9, 2007 ARTICLE »