Owner and winemaker, Tony Craig, is a former Shakespearean actor whose stage is now his wine cellar. After moving to California from England and hoping to find work in Hollywood, he realized soon that he needed to pursue another career. Down to about his last $50, he answered an ad in the newspaper for a cellar worker at David Bruce. He was hired, and within 14 months, he was a part of the winemaking team. He took to winemaking naturally, and eventually became head of the vineyard-designate Pinot Noir program. As Tony jokes, “Only in America!”

David Bruce Winery was a regular research center for Tony and he was allowed to try many experiments with small lots of grapes. It was through these trials that he was able to hone his winemaking style. He likes to call himself a minimalist when it comes to crafting wine, and his winemaking goals are elegance and balance, but not light-bodied Pinot Noir. After all, he remarks, “noir” means black and Pinot Noir offers density to work with. Cabernet has more pigment and is easier to work with for sure, but by guided winemaking techniques, he can stabilize the pigments that Pinot Noir does have to bring out color. The whole process begins with vineyard management. Flavors and aromas originate in the vineyard and you can’t influence those very much. So Tony focuses his winemaking on structure. He likes to age his Pinot Noirs for 14-17 months using the tightest grained oak he can find. The cooperage he uses comes from Hungary (there is tight-grained French oak but it is hard to get). The Hungarian oak has similar aroma profiles to French oak, but offers a little different spiciness and less tannin. Tony believes that lees add character so he mixes them, but does no racking.

He uses a unique fermentation technique to manage the cap. Instead of punch-downs or pump-overs, he uses a pulsar system in which large bubbles of air are injected into the must from the bottom of the fermentation tank. This stirs the wine and produces a very gentle breakup of the cap, with very little resultant abuse of the grapes. The skins and seeds are not grated which minimizes the release of harsh tannins. All Sonnet wines are produced at Silver Mountain Vineyards.

I paid a visit to Tony at Silver Mountain and tasted his latest releases and some 2005 barrel samples of Tondre’s Grapefield Santa Lucia Highlands Pinot Noir from neutral, French, and Hungarian oak barrels. The differences were striking, and this was very instructive. As we sipped, I realized what a deep thinker Tony was. He brought up a good question: “All winemakers talk the same talk when asked about the uniqueness of their vineyard - coolness, fog, wind, clones (all use similar), trellising (all use VSP), leaf pulling etc. So what exactly is it that produces a sense of place in Pinot Noir? Everyone has the same answer, but really nothing insightful is being said.” If you figure that one out, let me or Tony know.

Tony currently makes 1300 cases of four distinct Pinot Noirs from the Amber Ridge Vineyard in the Russian River Valley, Muns Vineyard in the Santa Cruz Mountains, Tondre’s Grapefield in the Santa Lucia Highlands, and Kruse Vineyard in York Mountain. Starting from 500 cases in 2003, he plans eventually to top out at 2,000. The website has where all 154 sonnets from old Will. Sonnet wines are available at fine retail stores in the Santa Cruz and Bay area. Some are also sold at the Silver Mountain tasting room (408-353-2278). The phone number at Sonnett is 408-353-4520.

Tony also makes the wines under the Silver Mountain Vineyards label along with Jerold O’Brian, and under the Muns Vineyard label with Ed Muns.

14.3% alc., $23.99 (BB), $33.99 (SRP). This stellar vineyard is sourced by a number of producers. I find this wine is a consistent, excellent, well-priced offering from winemaker Tony Craig. It is hard to find, possibly available from Silver Mountain Vineyards website, but every year the wine shows up at Bottle Barn. · Moderate garnet color in the glass. Deep aromas of dark berries, purple grape, spice and a hint of toast. The flavors echo the aromas in a mid weight plus style that is very sleek and comforting on the palate. The fruit is ripe, but not overripe. Complimentary oak chimes in with notes of vanilla, anise and tobacco. The finish is long, fruit-filled and juicy. Score: 90. Reviewed June 18, 2019 ARTICLE » 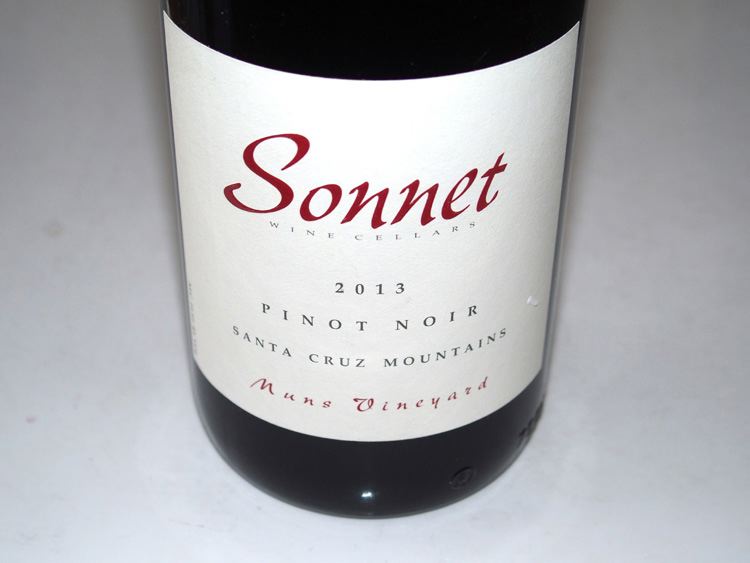 14.5% alc., $38. Harvest Brix 26.0Âº. Clones 667, 777, 114 and 115. Proprietary Assmanshausen yeast ferment. Aged 18 months in tight grain Hungarian oak barrels, 35% new, with lees stirring during malolactic fermentation. Unfined and unfiltered. · Moderate reddish purple color in the glass. Engaging perfume of crushed cherries, spice, mulch and sandalwood. Delicious core of black Morello cherries soaked in Kirsch and raspberry fruit with a pinch of spice and vanilla. Beautifully balanced with suave tannins, a smooth mouthfeel, and a very long finish lingering for at least 30 seconds. When re-tasted later in the day from a previously opened and re-corked bottle, the wine was even more expressive, bursting with cherry and raspberry goodness. Pure Pinot class in the glass. Score: 95. Reviewed February 26, 2016 ARTICLE »

14.5% alc., $20. · Medium reddish-purple color in the glass. Scents of black cherry glaze, plum reduction sauce, exotic woods and redwood forest. Smooth on the palate with tasty flavors of black cherry, plum and prominent spice reflecting the Hungarian oak elevage. Nicely balanced, easy to drink, with a respectable finish, but doesnât deliver like the stellar 2009 vintage of this wine. Still, a solid value at this discounted price. 87. Score: 87. Reviewed June 23, 2013 ARTICLE »

14.5% alc., $25. · Moderately dark reddish-purple color in the glass. Nicely perfumed with the scent of black stone fruit, black current, cardamon spice and vanilla. Full-bodied and velvety on the palate with dark red and black fruit flavors with a compliment of spice and cola. No intruding tannins, a soft and sensuous mouth feel, and a crisp finish with good staying power. Very good. Reviewed February 27, 2013 ARTICLE »

13.8% alc.. · The 2005 vintage in the Santa Cruz Mountains was on the âweightyâ side and this wine shows the bold structure of the vintage. Again, the aromatics are enchanting featuring bright cherries, spices, and ginger. The velvety texture alone is worth the price of admission. Perfectly balanced and thoroughly enjoyable. Reviewed April 1, 2007 ARTICLE »

14.5% alc.. Bottled 10 days ago. A mix of Pommard and a little 777 clone. · The nose offers the smell of fresh-crushed red grapes with a touch of chocolate. A masculine wine with more intensity than the Muns Vineyard bottling. Flavors are more earthy, like a trip in the forest. Again, the velvety texture is Pinot Noir at its best. This beauty finishes with a touch of oak, lively acid, and a hint of heat, all features that will blend and soften with aging. Reviewed April 1, 2007 ARTICLE »