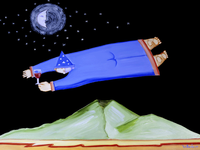 When I first visited Paul and Amy Kemp at their Loma Preita Winery high in the Santa Cruz Mountains, Paul was all smiles as he had just the day before obtained a permit to have a tasting room and build a 4,000 square foot winery on his property. The struggle for permits lasted two and a half years. The project was completed in 2009 and now welcomes visitors who dare to traverse the narrow winding road to the magnificent view property. His wife, Amy, has added many decorative touches to the Tuscan-styled winery. If you visit, make sure you check out the restrooms!

The property, purchased in the 1970s for a ridiculously small amount of money, has sweeping views of the entire Monterey Bay to the west and the majestic Mount Loma Prieta to the east. Paul has a beautiful home on the property to allow him to soak in the views.

Paul is still an active personal injury lawyer, but his interest in wine has led him to become a grape grower and winemaker. His 3-acre vineyard, planted in 2003 and maintained with the assistance of area viticulturist, Prudy Foxx, is laid out in front of his home. The vineyard has 2,800 vines, 2,100 of which are Dijon clones of Pinot Noir. The elevation here is about 2,300 feet making it one of the highest vineyards in the Santa Cruz Mountains.

Being energetic and resourceful, Paul decided to produce his own wine in 2003 from purchased grapes. He used a consulting winemaker for guidance and essentially made the wine in his garage. He was startled when two wines were awarded gold medals: the 2003 Loma Prieta Cabernet Sauvignon won gold at the 2006 West Coast Wine Competition, and his 2004 Loma Prieta Pinot Noir won gold at the 2006 San Francisco Bay Wine Competition. He was flattered, but his intent is not to win medals, but to make wine he can be proud of, enjoy drinking himself, and sell a to other wine lovers. With planned production of 500 cases of Pinot Noir, he bottles one Pinot Noir from estate grapes and a second bottling from purchased grapes from Corralitos.

More recently, Loma Prieta has focused on the Pinotage grape, including a sparkling Pinotage that is produced at Rack and Riddle. The winery claims to be the largest producer of Pinotage in North America. Pinotage grapes are sourced from Amorosa Vineyard and Karma Vineyard in Lodi. An inaugural estate Pinotage was offered from the 2011 vintage. Viognier is also offered.

The Loma Prieta label is striking. The artwork depicts a whimsical magician holding a glass of wine and flying over Mount Loma Prieta with an earthquake fault clearly visible. The artwork was specially commissioned by the Kemps and displays the work of Martin LaBorde from New Orleans, Louisiana. LaBorde was born with a hearing defect, and spent the first twenty years of his life in a world of near total silence. As a result, his visual sensewas heightened and he developed a rich inner life to compensate for that part of reality that had been denied to him. His artwork features a little magician named Bodo who lives in a spiritual landscape that is dominated by a deep black space. Several of LaBorde’s original paintings adorn the walls of the Kemp’s home.

There is some limited distribution of Loma Prieta wines in the Santa Cruz area. You can contact Amy, who handles the sales and marketing at 408-353-4570. She is a real wine enthusiast and knows Pinot. The wines are also sold through the winery website. Winery visits are available by appointment, but don’t head up there without strict instructions from Amy as maps and navigation systems are incorrect! The address is 26985 Loma Prieta Way, Los Gatos, but this estate is about as far away from the town of Los Gatos as you can get. It is an adventure driving there, but once you arrive, you will receive a warm welcome and a glass of Pinot as you succumb to the magical view.

15.1% alc., $45. · Dark purple color in the glass. Aromas of dark red berries and eucalyptus. Earthy and rustic with a full monty of dark red and black fruit flavors highlighted with a note of dark chocolate, all swathed in firm tannins. Better the following day from a previously opened and re-corked bottle showing less tannin, more fruit and more persistence on the finish. Needs a couple of years in bottle. Good (+). Reviewed January 12, 2012 ARTICLE »

14.3% alc., $45. · Dark purple color in the glass. Aromas of black fruits, tobacco, earth, beet root, jam on toast and oil can (from oak). Tasty core of black raspberry and blackberry fruit with a little red fruit and tea flavors chiming in. The fruit is really vivid and charming and reminds of Pinot Noir. Silky with mild fine-grain tannins. Very good. Reviewed January 12, 2012 ARTICLE »

14.4% alc., $50. · Moderately dark reddish-purple robe. The nose grows and grows in the glass exploding with fresh black cherry pie filling and new oak aromas. The bold fruit is secured by substantial tannins and adequate acidity creating admirable balance. The wine possesses a mouth coating fullness and a finish that would make Hollywood proud. This one deserves an Oscar. Reviewed March 15, 2009 ARTICLE »

14.5% alc., 195 cases, $50. Gold Medal, 2008 San Francisco Chronicle Wine Competition ($35 and over category). · Confected cherry aromas. Plenty of well-spiced cherries on the palate with coffee and herbal highlights and an appealing soft texture. A well-bred Pinot that still has some tannins to shed on the long, stylish finish. Reviewed March 17, 2008 ARTICLE »

14.5% alc., 195 cases, $50. · A complex aromatic profile that changes constantly in the glass. Black cherry is a constant but there are fleeting scents of spice, cinnamon candy, sawdust, mocha, vanilla and prune. Flamboyant dark cherry and berry flavors with an earthy underpinning and a touch of oak. Full-bodied and intense, but framed nicely with acidity and moderate fine tannins that become more prominent in the glass over time. Reviewed March 15, 2009 ARTICLE »

13.5% alc., $50. · There are plenty of attractive red fruit aromas in this wine with a nice touch of oak vanillin. Flavors of fresh cherries, earth and anise are set off by attractive oak notes in the background. The texture is quite gentle and softer than the 2004. Reviewed April 1, 2007 ARTICLE »

13.5% alc., 44 cases, $50. The grapes come from the Corralitos area of the Santa Cruz Mountains. · This is a big-styled wine in the sense of prodigious fruit, but it has a silky texture and soft mouth feel. The attractive aromatics feature black cherry, wet leaves, toast, and a hint of Jolly Rancher red candy. Flavors tend toward the earthy side with mushroom prominent. Plenty of ripe dark fruit coats the palate. The finish is a little warm, but there are nice oak and bittersweet chocolate memories. Reviewed April 1, 2007 ARTICLE »