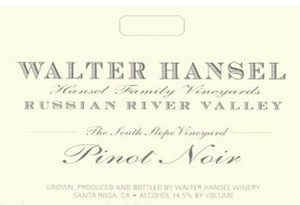 Walter Hansel Winery and Hansel Family Vineyards in the Russian River Valley has become well known for unique Burgundian-styled Chardonnays and Pinot Noirs. Walter Hansel was a lifelong wine lover who first planted vineyards in 1978 just down the road from Kistler and Dehlinger. Stephen Hansel, Walter’s son, planted additional acres in the late 1980s, founded the winery in 1996, and made the first commercial vintage, 1996, which produced just 350 cases of Chardonnay and 70 cases of Pinot Noir. New vineyards and a new wine making facility were added at the family’s estate in 1999. Stephen Hansel owns several automobile dealerships in Sonoma County, which allows him to indulge his passion for winegrowing.

Stephen Hansel’s mentor was Tom Rochioli, who helped him in the early years of his winemaking efforts which began out of a garage. Today Walter Hansel Winery farms 75+ acres located at the southern tip of the Russian River Valley near the Sebastopol Hills. The estate vineyard is planted to five different French and California Pinot Noir clones (and four Chardonnay clones) which are from 3 to 23 years old. The clones are planted in various vineyard blocks, and although the land has three distinctive soils, the flavor variations of the wines are derived primarily from different clones. The vineyard designated wines are clonal specific. Yields are kept low (1.5-2.7 tons per acre). All of the fruit is hand-harvested in the early morning hours and carefully sorted. 100% of the fruit is de-stemmed and after a cold maceration of 5-7 days, is fermented with natural yeasts in open-top ferment tanks. Cooperage varies from year-to-year, cuvee-to-cuvee, and a mix of new, one- and two-year old barrels are utilized.

The vineyard-designate wines are produced in quantities of 100-750 cases and the estate wines 1200 cases. Prices are remarkably low considering the quality, ranging from $27-$40. In 2003 there were five block- and vineyard-designates (The South Slope, The North Slope, Cuvee Alyce, Cahill Lane, and Hirsch Block 6), and one estate Russian River Valley bottling. All of the Pinot Noirs produced vary to some degree in flavor, density, and acidity, but in general, the style is notably more lean and austere than many California Pinot Noirs. In fact, I know of only a few other wineries in California that are similarly styled. Lovers of opulent-styled Pinot Noirs may be disappointed. These are not stand-up social wines, but rather sit-down, table wines meant for food. About 4,500 cases of Pinot Noir and 5,000 cases of Chardonnay are produced annually.

Walter Hansel Winery mailing address is P.O. Box 3437, Santa Rosa, CA 95402. Tasting can be arranged by appointment. Stephen Hansel welcomes phone calls to discuss the wines before ordering. The phone number is 707-525-3614. The Chardonnays are similarly Burgundian in style and highly-awarded. There is limited retail distribution.

14.8% alc., $39. · Medium reddish-purple color in the glass. Bing cherry aromas and flavors really jump out in this wine which has plenty of spice and cola to add interest. Soft in the mouth with plenty of typical rich, plush Russian River Valley fruit. Oak stays in the background and the tannins are nicely integrated. More body and spice than Tyra Banks on a Victoriaâs Secret runway. Score: 92. Reviewed August 14, 2013 ARTICLE »

14.4% alc., $36. · Patience is required and rewarded with the emergence of a rich dark red cherry and berry core on the nose and palate. The flavors have a slight confected tone and a hint of smoky oak lurks in the background. Soft tannins create a silky mouth feel and the dry finish is pleasingly fruity. Very good. Reviewed June 22, 2010 ARTICLE »

14.6% alc., $36. · The enticing nose offers a cherries jubilee with a hint of seasoned oak. Delicious essence of dark red and black cherries and raspberries with savory herbs adding interest. Perfectly composed with gossamer tannins, vivid fruit, and balancing acidity. This is the one I want to dance with. Reviewed June 22, 2010 ARTICLE »

14.3% alc., $36. · Straw yellow color in the glass. Aromas of lemon curd, roasted nuts and a hint of toasted oak. Crisp and bright with layered flavors of white peaches, lemon zest, brown butter and a healthy dose of dusty oak. Slightly creamy in texture with a bright tug of acidity on the finish. Very good. Reviewed June 22, 2010 ARTICLE »

13.7% alc., $27. · This Pinot Noir has a distinctive old-style Burgundian rusticity. There is a nice core of cherry and earth notes which take on structure with exposure to air. The fruit is restrained and the wine finishes with plenty of acid and a touch of astringency. Reviewed January 10, 2007 ARTICLE »

14.5% alc., $29. · Similar in style to the above wine. The aromatics are attractive, offering toasty cherries and Asian spices. The wine is austere on the palate, featuring more herbal and earthy notes than fruit. The wine finishes with brisk acidity and noticeable oak. Reviewed January 10, 2007 ARTICLE »