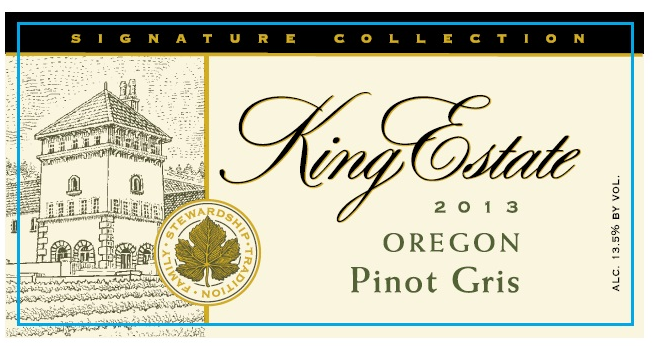 Located southwest of Eugene, Oregon, this beautiful thousand-acre estate has 250 acres of organic vineyards, a grapevine grafting and propagation facility, nursery, orchards, restaurant (The Restaurant and Wine Bar at King Estate), and a lush organic garden. The winery is styled as a grand European chateau.

King Estate is Oregon's largest producer, the largest organic producer (with 1,033 acres certified organic by Oregon Tilth), and is most known for its Pinot Gris which is among the best and a standard bearer from Oregon. Several Pinot Noir blends and single-vineyard Pinot Noirs are produced. 50% of production is estate grown.

The winery has been guided by Ed King III since the winery's founding in 1991. Ed King, Jr. was retired from a successful career in the manufacture of navigation and radio equipment for aircraft, when his son, Ed King III, started acquiring vineyard parcels in Oregon while an MBA student at the University of Oregon, realizing the growth of the Oregon wine industry. Together, they bought 600 acres of land at the southern end of the Willamette Valley near Eugene.

The King Estate produces Pinot Noir, Chardonnay and Pinot Gris from estate and purchased fruit with Pinot Gris being the most notable and a benchmark for Oregon. The wines are offered in three levels: Domaine, Signature and Vineyard Designate. The winery's second label, Acrobat, has been very successful. The North by Northwest label offers wines from Washington.

The wines from estate fruit bear an Oregon AVA, as the property is located just outside the southern boundaries of the Willamette Valley AVA. This troubled the winery so much that in 2014 the winery petitioned the TTB to include the estate in the AVA and this change is expected to occur.

Jeff Kandarian is the head of winemaking and Meliton Martinez is the viticulturist. King Estate is committed to organic and dry farming of its 470 acres.

13.0% alc., 90,000 cases, $17. The winery also produces a higher end Pinot gris from 100% organically grown Estate fruit under the Domaine designation ($25). · Classic with white flower and honey aromas and flavors of pear, banana and melon. Appealing richness with a good grip on the finish. Reviewed March 26, 2009 ARTICLE » 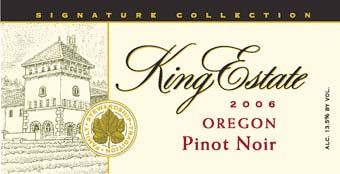 13.0% alc., $23 (winery retail is $29). King Estate is home to the largest contiguous organic vineyard with over 465 acres planted. Director of Viticulture and Winemaking is John Albin. All vineyards are dry-farmed. Aged 10-12 months in French oak barrels, 27% new, medium toasted staves. · High-spirited scents of red raspberries and spiced cherries. Modest but satisfying cherry and berry core augmented with subtle oak accents and displaying gossamer tannins and a hint of citrus peel on the finish. Lacks some punch on the mid palate but will work perfectly fine at the dinner table. Reviewed March 26, 2009 ARTICLE »

22,000 cases, $26. Located southwest of Eugene, this beautiful thousand-acre estate has 250 acres of organic vineyards, a grapevine grafting and propagation facility, nursery, orchards, and a lush organic garden. The winery is styled as a grand European chateau. The 2004 Domaine Pinot Noir is sourced from the estate vineyards and includes four Dijon clones (113, 115, 375, 538). Aging is done in 67% new oak for 16 months. The wine is available on the webite. · This is not a Pinot for wimps. A very rich, monstrous nose of red and black fruits highlighted by vanilla oak leads to a well-endowed Pinot of great allure. The finish lasts for what seems like an eternity. A great sipping Pinot. At 12.9% alcohol, you can indulge heartedly. Reviewed January 22, 2007 ARTICLE »