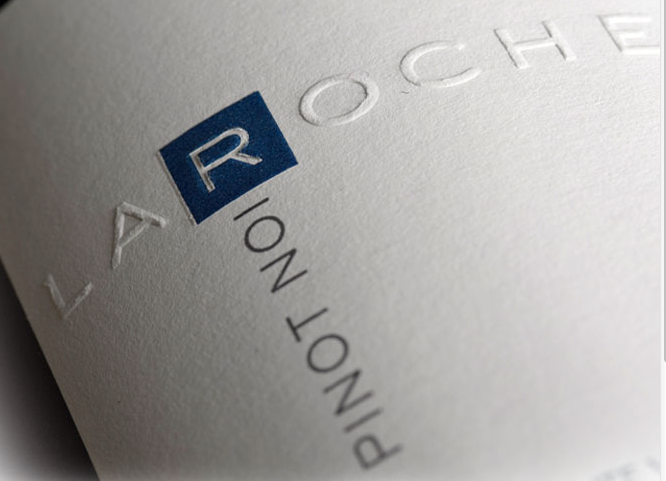 A tasting room is open daily from 11:00-4:30 in Kenwood at 233 Adobe Canyon Road The wines are available on the website.

14.1% alc., 180 cases, $125 (Club member exclusive). Swan, Calera and Dijon 667 clones. Winemaker is veteran Tom Stutz. · Moderate reddish purple color in the glass. Highly savory and pungent on the nose with cherry aromas in the background. The mid weight cherry flavor is underpinned with a vegetal character and framed by muscular tannins that stick out on the modest finish. Score: 87. Reviewed July 24, 2016 ARTICLE »

$N/A. La Rochelle is the only winery producing a vineyard-designate from this prestigious site. · Aromas of wild berries, leading to flavors of blackberries and black plums accented with spice. Nicely integrated tannins and impressive finishing power and length. Exceptional. Reviewed April 13, 2013 ARTICLE »

13.2% alc., 157 cases, $22, screw cap. Released April 16, 2011. Pommard and Mariafeld clones. · Pretty pinkish coral color in the glass. Very pleasing aromas of blood oranges, bananas, strawberries and pink lemonade. Crisp and tangy on the palate with a tasty array of red berry, guava, melon and orange flavors. I really liked this wine, put the partially emptied bottle in the refrigerator, and polished it off over the next two days. I donât often get excited by a rosÃ©, but this one caught my eye. I am buying some of this perfect summer afternoon drink for myself. Reviewed July 1, 2011 ARTICLE »

14.9% alc., 90 cases, $65. Released April 21, 2012. · Light straw color in the glass. Aromas of lemon curd, golden apple, pastry cream and roasted nuts. Delicious array of flavors including baked pears, roasted hazelnuts, buttered brioche, baked apples and grilled peaches with a slight petrol note. Slight creamy in texture, with a citrus-driven acidity in the background, and a hint of heat on the finish. Definite oak influence but it is complimentary. A buttery style of Chardonnay made popular in California by Kistler and Aubert and others that will appeal to those who welcome this genre. Very good (+). Reviewed June 24, 2012 ARTICLE »

14.0% alc., 70 cases, $38. Released May 1, 2011. Winemaker Tom Stutz. · Moderate reddish-purple color in the glass. Really attractive nose offering an array of aromas including black cherries, wild dark berries and a hint of vanilla, holding up nicely over time in the glass. Very tasty core of dark red cherries and berries with accents of spice, oak and vanillin. Medium-weighted with plenty of finesse, restrained tannins and good acidity, finishing light, clean and smooth. A bit off the beaten track and for that reason very enticing. Reviewed July 1, 2011 ARTICLE »

14.1% alc., 55 cases, $42. Released August 3, 2012. 100% Pommard clone grown on the Duttonâs Campbell Ranch with a small amount of Mission Ranch Swan selection blended in. Aged 17 months in 100% second used French oak barrels. · Moderate reddish-purple color in the glass. Nicely perfumed with aromas of fresh picked black cherries, black raspberries, rose petals and spice. Deep, but not overbearing flavors of Bing cherries and cola, caressed by soft tannins, infused with vim by bright acidity, and offering a lengthy memory of cherries on the finish. Quintessential Russian River Valley Pinot Noir and one of the better appellation wines from that region on the market. Very good (+). Reviewed December 8, 2012 ARTICLE »

14.2% alc., $48. Released January 14, 2012. Farmed by the Dutton family, this vineyard is located near the towns of Graton and Occidental. 100% Pommard clone. Aged 16 months in 50% new French oak barrels. · Medium reddishpurple hue in the glass. Really enticing nose that picks up considerable olfactory interest over time in the glass. Aromas of dark cherry pie glaze, dark berries and spice. Plenty to like with nicely ripened flavors of dark red cherries and berries, nicely spiced, picking up intensity over time. A spirited wine with supple tannins, really struting its stuff the next day from a previously opened and re-corked bottle. Very good. Reviewed December 8, 2012 ARTICLE »

14.7% alc., 275 cases, $48. Released August 2, 2012. Martini and 113 clones. Aged 26 months in 45% new and 55% second use French oak barrels. · Moderate reddish-purple hue in the glass. Smells like a smoke-tainted wine with strong aromas of wood smoke and tar. Unpleasant ash, smoke and tar flavors overwhelm the middleweight dark fruit core which is presented on a silky platform with supple tannins. Unsatisfactory, but I only had one bottle to review and this wine was definitely not consistent with the many wines I have had from this winery. Reviewed December 8, 2012 ARTICLE »

14.8% alc., 125 cases, $48. Released September 8, 2012. Originally planted to 6 acres of Pinot Noir in 1997. Today the vineyard contains 80 acres of Pinot Noir and 25 acres of Chardonnay, farmed by Joe Allarid. Clones 943 and Pommard are in this bottling. Inaugural release from this vineyard. Aged for 18 months in 20% new and 80% second use French oak barrels. · Medium reddish-purple color in the glass. Smells like the freshest blackberry jam you have ever experienced. Delicious and entirely seductive, with a moderately intense core of blackberry, cassis, Hoison sauce and vanilla flavors. Smooth and satiny, with well-balanced tannins, well-integrated acidity in the background and the most outrageously long finish of all the wines in this La Rochelle lineup. I have had several great wines from this vineyard and this one continues the trend. Reviewed December 8, 2012 ARTICLE »

14.6% alc., 115 cases, $75. Released October 1, 2012. Inaugural release from this vineyard. 100% Donum clone (a massal selection from cuttings brought to California by Roederer). Aged 19 months in 40% new and 60% second use French oak barrels. · Moderate reddishpurple color in the glass. A very exotic wine exhibiting aromas of wild berries and musk that really draws you into the glass. Delicious array of dark red and black berries with a touch of spice and an earthiness which adds to the appeal. Very supply fine-grain tannins, a silky texture and generous finishing power. Significantly better the following day from a previously opened and re-corked bottle. Like actress Keira Knightley, perfumed and sensuous. Reviewed December 8, 2012 ARTICLE »

15.3% alc., 141 cases, $48. Release spring 2011. · Moderately light reddish-purple color in the glass. The nose is all oak initially, opening with air to reveal very appealing aromas of black cherries and vanilla spice. The wine possesses intense mid palate fruit of the highest pedigree yet is light on its feet (as in iron fist in a velvet glove). Delicious core of black cherry and black raspberry fruit with a touch of cola. A striking wine that is smoothly textured and finishes with an impressive peacock tail of fruit. Higher in alcohol, but not the least bit over ripe or jammy. Reviewed August 13, 2011 ARTICLE »

14.7% alc., 235 cases, $42. This is the first wine in the Heritage Series, sourced from the Mission Ranch in Arroyo Seco and Garysâ Vineyard in the Santa Lucia Highlands. It is composed of Pommard, WÃ¤denswil and Mariafeld clones from the Mission Ranch, and the Pisoni clone from Garysâ Vineyard. Aged 10 months in French oak. · The nose trumps the flavors at this stage in the wineâs evolution. I wanted to drink the aromas of cherry vanilla cola. Light in weight, the flavors of red fruits, herbs and oak travel smoothly over the palate. The fruit is very shy at this point. I would cellar this wine for a year. Reviewed May 13, 2007 ARTICLE »

15% alc. · There is a nice mÃ©lange of red berries and mushrooms on the nose with a solid core of plush red fruits and a kiss of oak and toast in the background. Remarkably balanced considering the high alcohol. In my family, this was controversial, as my wife noticed the alcohol right away on the finish, but I could not detect any heat on the backend. This wine will appeal to those who cherish fruit-driven, big-boy Pinot Noirs. Reviewed May 13, 2007 ARTICLE »

355 cases, $20. La Rochelle Winery focuses on small lots of Pinot Noir. Formerly Mirassou, the winemaker Tom Stutz crafts several vineyard-designate Pinot Noirs of high quality. A tasting room is open each afternoon in the Livermore Valley. The wine is available on the website. · You wonât find a better $20 Pinot anywhere. The nose is nicely spiced with nutmeg and cardamom. Light on the palate, there are attractive spice and mocha highlights to the red fruit core. The tangy finish completes this nicely balanced and very drinkable Pinot Noir. Reviewed January 22, 2007 ARTICLE »