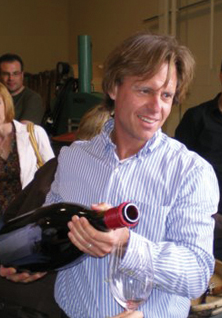 Walt Babcock was a successful Seal Beach dentist when he and his wife Mona started Walt’s Wharf in 1970. At that time, if you wanted fresh fish, you had to travel 10 miles to Newport Beach to the south or 25 miles to San Pedro to the north. Initially, Walt used his own fishing boat to procure the fresh fish for the restaurant. Later, he established contacts with fisherman so there was always an extensive choice of fresh fish on the menu. By 1978, the rigors of running a dental practice and a restaurant had sent Walt and Mona looking for a retreat.

Upon finding 110 acres of land in the Santa Rita Hills region of Santa Barbara County on Highway 246 between Buellton and Lompoc, they sold Walt’s Wharf in 1979 and devoted themselves to winegrowing. At the time, many experts thought the region was too cool and windy to grow wine grapes. Only Sanford & Benedict Vineyard, planted in 1972, had gained recognition. Initially, Babcock planted 20 acres of Chardonnay, Riesling, Sauvignon Blanc and Gewürztraminer since these were popular varieties at the time. Within a few years, several producers were making compelling wines from the Babcock’s 25-acre vineyard.

Walt's son, Bryan had finished college and did not know what career path to pursue. He decided to pursue an MBA degree and applied to several prestigious schools. He was turned down by all them and turned to the master's program in food science and enology at the University of California at Davis. In 1984, he began working at the vineyard and crafting wine with his father. He became so enamored with winemaking, that he dropped out of school and joined his parents as winemaker. Soon thereafter, a winery was built.

With Brian’s first harvest, he was awarded a gold medals at the Los Angeles County and Orange County fairs for the 1984 Babcock Estate Sauvignon Blanc, and Babcock Winery was off and running. Today Babcock Winery and Vineyards is a 10,000-case-a-year winery with 80 acres planted to multiple varietals including Pinot Noir. The wines feature estate fruit as well as grapes from other select California vineyards. Brian Babcock has won multiple winemaking awards including being named one of the “Top Ten Small Production Winemakers in the World,” in 1995 by the James Beard Foundation (the only American so honored).

13.7% alc., $30. · Attractive aromas of black cherries, red currants and strawberries with a touch of spice box. Shallow dark fruit flavors which have a noticeable underpinning of oak. The nose trumps the flavors in this linear wine. Does pick up a bit with time in the glass. Decent. Reviewed March 2, 2011 ARTICLE »

14.3% alc.,950 cases, $40. Bryan Babcock has been crafting wines from his family-owned winery in the Sta. Rita Hills appellation of Santa Barbara County since 1989. He has won many awards, including being named by the James Beard Foundation as one of the âTop 10 Small Production Winemakers in the World.â This wine is 85% Babcock Estate Pinot Noir, 14% Rabbit Ridge Vineyard Paso Robles Pinot Noir and 1% Syrah. Aged for 10 months in 44% new French oak. · The aromas are very earthy, damp and funky. Delicious cherry fruit with sidecar notes of spice and organic matter. The lively finish is very refreshing and urges the drinker to sip on. Reviewed December 16, 2007 ARTICLE »

14.5% alc., $72 (on wine list). · This was a terrific wine and even Zorro liked it. This was saying a lot, for it was a wine of finesse and elegance, so frequent in Pinot Noir, but unheard of in a Zin. It was beautifully balanced with a lengthy finish of hi-tone juicy cherries and cinnamon delivered with perky acidity. Amazingly pure and refined and a perfect accompaniment to lunch. I am looking to purchase some. Reviewed October 15, 2006 ARTICLE »