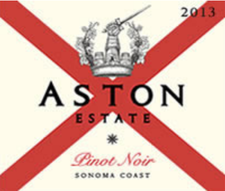 Aston Estate was launched in 2001 by three partners including winemaker Thomas Rivers Brown, Frederick and Carol Schrader of Schrader Cellars and Chuck Sweeney of Vine Cliff. Schrader Cellars specializes in Cabernet Sauvignon which is vinified by Thomas Rivers Brown and has been highly praised in the wine press. Grapes are currently sourced from the 15-acre Aston Estate Vineyard in Annapolis that is warmer than the Occidental-Freestone area. The vineyard is about five miles and two ridge lines in from the coast just outside the fog line.

The Aston Estate style is different than the Rivers-Marie Pinot Noirs and is largely dictated by Frederick Schrader’s palate. The grapes are picked riper, the wines are fruit-driven and are less acid-driven, and they exhibit a blacker fruit profile. Thomas describes it as “an old Central Coast style .” The clones used are Dijon 115, 667, 777 and Swan Selection planted in Goldridge soil. Yields are small, less than 1.25 tons/acre. The vineyard is managed by Ulises Valdez.

Schrader planted also planted a vineyard in Cazadero to California heritage clones. The 40-acre Sonoma Coast estate, named Boar's View, is planted to 25 acres of Pinot Noir along with Chardonnay and Syrah. The name Boar's View is derived from the property's location which overlooks Marcassin Vineyard (Marcassin is French for "wild boar."). This vineyard is the source of wines for the Boar's View label, also made by winemaker Thomas Rivers Brown.

The wines are in retail distribution, particularly sources that carry Schrader wines and are sold through a mailing list that is managed in conjunction with Schrader Wines. The 2008 vintage Pinot Noirs were lost to smoke damage from that summer's wildfires.

14,7% alc., $70. · Subdued nose showing demure black cherry and wild herb aromas with a whiff of alcohol. Substantial dark red fruit core with a hint of chocolate. The wine is quite withdrawn at present. Nicely balanced with a clean finish. This shows good potential and will benefit from another one to two years in bottle. Reviewed July 19, 2008 ARTICLE »

14.6% alc., $70. · Intriguing perfume of underbrush, forest floor and dark red cherry with a nice hint of oak. The wine shows a soft core of tannin wrapped in layers of luscious cherry and raspberry fruit, providing a fullness that envelopes the tongue. Everything is in beautiful balance and the combination of two clones provides more interest than the single clonal wines described above. This was downright terrific the next day when sampled from an opened, re-corked bottle. Reviewed July 19, 2008 ARTICLE » 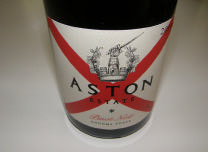