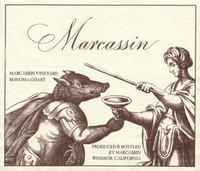 Helen Turley is one of the most influential winemakers in California, receiving critical acclaim for almost every wine she touches. She was instrumental in creating the cult wine phenomenon and her work with Bordeaux varietals may rival her contribution with Pinot Noir and Chardonnay. Turley has been the consulting winemaker for some of the best wineries in the country – Peter Michael Winery & Vineyards, Pahlmeyer, Colgin, Bryant Family Vineyard, Martinelli (the consulting winemaker from 1993-2010) – just to name a few of the nearly 20 clients.

Marcassin is Turley’s own label owned in partnership with her husband, John Wetlaufer who is a viticulturist. Together they produce 2,500 to 3,000 cases of Chardonnay and Pinot Noir, with 80% of the wine sold to mailing list members who pay $125 a bottle. The waiting list to join the allocation list is long, with some waiting years to get a chance to purchase (the waiting list is said to contain 5,000 names).

Marcassin (French for 'young wild boar') did not have its own winery for many years. The wines were crafted at the Martinelli winery in the Russian River Valley from 1992 to 2011. Construction began in August, 2010 on a 10,000 square foot winery in an industrial park in Windsor adjacent DuMOL.

Marcassin’s 20-acre estate vineyard, Marcassin Vineyard, is located on the Sonoma Coast and is planted two-thirds to Pinot Noir and one-third to Chardonnay. The original 40-acre estate was purtchased in 1985, and has been expanded to include 240 acres located at an elevation of 1,200 feet a short distance from the Pacific Ocean. Fruit for the other two vineyard- designated wines is sourced from other neighboring true Sonoma Coast vineyards (Blue Slide Ridge and Three Sisters for the Pinot Noirs, both owned by the Martinellis, and developed along with Turley and Wetlaufer.

After 2010, Turley will only produce Pinot Noir and Chardonnay from her estate 20-acre Marcassin Vineyard on the Sonoma Coast which is came into full production in 2009.

The winery is very private and not much information is forthcoming. Turley is said to plant her vineyard very densely, severely limit yields, and pick very ripe. In her winemaking, Chardonnay clusters are pressed whole, while Pinot Noir clusters are de-stemmed, cold soaked with one pump over per day. She uses natural yeasts, mostly new oak, and leaves the wines on the lees after fermentation. No fining, filtering or cold stabilization so the wines may have a fine sediment and occasionally tartaric acid crystals. Typically, the wines are aged five years before release.

Stylistically, the wines are rich and opulent with noticeable sweetness reflecting generous alcohol. The wines have a reputation for aging very well.

Marcassin produces about 100 barrels of Pinot Noir and Chardonnay. Pinot Noir is two-thirds of the production. Your only chance to obtain Marcassin wines is on the secondary market where they demand among the highest prices for any domestic Pinot Noir (in the range of $300-$350 or more per bottle). Assistant winemaker Matt Courtney has worked several harvests at Marcassin and may start his own brand when Marcassin moves into its new winery. 707-942-5633.

14.9% alc., $ (current retail price from $150 to $595). · Very ripe and prodigious black fruits touched by oak, stems, mushroom, earth, citrus and some noticeable alcohol. The tannins are reigned in and the mouth feel is very dreamy. Good but not exceptional because of the boozy impression that lingers. Reviewed August 19, 2008 ARTICLE »