Proprietors Peter and Rebecca Work farm their estate vineyards in the Sta. Rita Hills AVA biodynamically. Their son, Don Schroeder, has been their consulting enologist until 2008 when he left to become winemaker at Sea Smoke. Bruno D'Alfonso (Sanford, Badge, Alma Rosa) has signed on as the consulting enologist.

Danish national Peter Work developed an interest in America while working as a graduate student at Princeton. He took a job at Price Waterhouse as an information technology consultant. After marrying Rebecca (a former Alaska resident), the two dreamed of owning a vineyard. They cashed out of the human resources company they helped start, and in 1999 purchased an 82-acre property in the Sta. Rita Hills AVA that was former cattle-grazing land. Their first commercial wines were made in 2003 and they moved to their current winemaking facility in 2005 (originally shared with Ken Brown who later moved to the Terravant custom-crush facility in Buellton).

They have developed a 25-acre estate vineyard planted to Pinot Noir and Syrah. The vineyard is the first in Santa Barbara County and one of the few in the country to be certified sustainable, organic and biodynamic.

In 2000, the Ampelos Cellars label was born and the first estate wines were released from the 2002 vintage. Ampelos is a Greek word meaning "vine." The Works spend time each year in the Mediterranean and there they maintain a guest house on Folegandros in Greece's Cycladic Island group.

In addition to Ampelos Cellars estate Pinot Noir and Syrah, Syrah, Grenache and Viognier are produced from purchased grapes. Estate grapes are supplied to Brewer-Clifton, Jaffurs and Samsara for their own vineyard-designate Ampelos bottlings. Total production is 3,500 cases annually.

Tasting is by appointment at the winery in the Lompoc "Prison Ghetto," at 1633 W Central Ave., Ste B, where Ampelos shares their winemaking facility with Dragonette Cellars. The wines are sold on the website and through local retail distribution. 805-736-9957

14.4% alc., pH 3.51, 1,059 cases, $35. Third harvest from this vineyard. Clones 115 (61%), Pommard (31%), 667, 777, 828. New blocks interplanted with Pinot Gris to facilitate cofermentation and co-pigmentation (to obtained darker color). 100% de-stemmed, 3-4 day cold soak, inoculated yeast, 80% free-run with gentle press wine added using manual basket press. Racked to 30% new French oak barrels and inoculated with MLF bacteria. Aged in barrel 17 months. · Moderately light garnet color. Vivid black cherry aromas with a hint of baking spice and the faintest oak. Very tasty medium-weighted flavors of cherries and raspberries with a touch of spice and citrus. Soft, smooth and clean with minimal ripe tannins and a good grip of acidity in the background. Well-bred and well-crafted. This Pinot Noir is what many aspire to, but most fall short of. Great value as well. Reviewed September 5, 2009 ARTICLE »

14.5% alc., 535 cases, $35. Also tasted at home before the Shootout tasting. · Lovely nose of fresh picked wild strawberries and raspberries. Well endowed varietal flavors of cherries and berries with a sidecar of gentle oak. Fresh and juicy, smooth in the mouth with caressing tannins and a pleasant acid lift on the tangy finish. Reviewed January 1, 2009 ARTICLE » 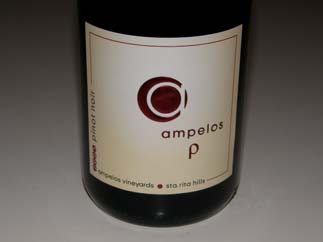 14.5%, 376 cases, $48. This wine is composed of the best 16 barrels from the 2005 vintage. Primarily Pommard clone with 2 barrels of Dijon clone 115. Aged in 56% new French oak barrels. Released one year after bottling. · Very fruity aromas of rich black cherries, raspberry jam and a lovely oak accent. A notable entry of plush dark berry fruits coat the tongue, offering some cherry and pie crust flavors, and ending in a stylish and refreshing finish of admirable persistence. The ripe tannins are nicely held in check and the whole package is thoroughly satisfying. This wine was also tasted at home with the same impression. Reviewed January 1, 2009 ARTICLE »