Eric Hamacher is one of many winemakers who started out on a career path to becoming a doctor but switched to making wine. After working a harvest, he was hooked, and attended University of California Davis, receiving a degree in viticulture and enology. He gained experience at various wineries including Mondavi, Chalone and Etude and finally ended up in Oregon.

With his wife, Luisa Ponzi, he started the 2000 case winery, Hamacher Wines, in 1995. Eric was the driving force behind the Carlton Winemaker’s Studio, a “green” LEED registered cooperative winemaking facility that opened in 2002 and is now home to as many as twelve different wineries. The 15,000-square-foot gravity flow winery is a partnership between Eric and his wife Luisa Ponzi, winemaker at Ponzi Vineyards, and Ned and Kirsten Lumpkin of Lumpkin Construction in Seattle and Lazy River Vineyard in Yamhill, Oregon.

Originally, Eric was committed to aging his wines before release (18 months in barrel and another 18 months in bottle) and he was one of the last to release a vintage Pinot Noir. More recently he has bowed to current winery protocols and has just released the 2006 vintage of his Hamacher Pinot Noir. Eric sources fruit from up to twelve different vineyards for the single Pinot Noir he produces under the Hamacher label. A value-priced Pinot Noir from declassified fruit is released under the H label.

Hamacher Wines are distributed through fine retail stores and sold on the website. The wines are available for tasting daily at the Carlton Winemaker’s Studio, located at 801 N Scott St, in Carlton (www.winemakersstudio.com).

13.5%, $21, screw cap. Second label from Hamacher Wines (Carlton Winemakerâs Studio). Any wine in barrel after 18 months that does not elevate the quality of the Hamacher blend is âdeclassifiedâ into H and sold just after bottling. The sole purpose of âHâ is to make the Hamacher Pinot Noir look better, but you wonât be disappointed with âHâ in comparison to other Pinot Noirs at this price point. · Shy initially but builds in interest in the glass. Red cherries, wildflowers, herbs and hay on the nose. Middle weighted cherry and berry flavors with a vein of herbs running through. Admirable richness with fine-grain tannins and respectable harmony. Reviewed March 26, 2009 ARTICLE » 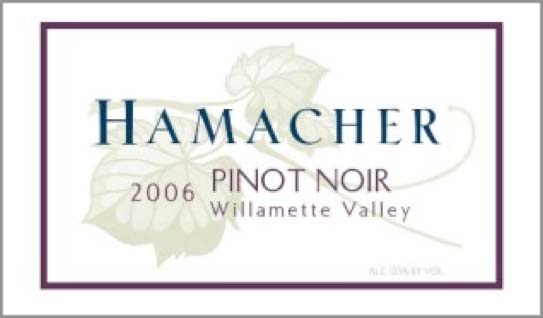 13.5% alc., $37. · Subdued, but pleasant scents of red fruits, Jolly Rancher red, and herbs. Restrained and elegant stylistically with a graceful core of darker red berries and cherries and a deft touch of oak. Soft and silky and very round with a finish that fades gently over time. A pristine Pinot of great charm. Reviewed September 15, 2008 ARTICLE »