The Martinelli family are part of the historical fiber of the Russian River Valley. They have been growing grapes and apples in Sonoma since 1887, planting their first Pinot Noir in 1970. The family patriarch is Guiseppe Martinelli who, at the age of 19, along with Luisa Vellutini, age 16, made his way to California from Tuscany to find farmland and to start a winery.

Guiseppe had been a winemaker in Italy and with his viticulture knowledge, he was hired to plant a vineyard for a farmer in Forestville. Within two years, he earned enough money along with borrowed money from a local wood cutter to buy land of his own. Working side by side on a 60 degree slope, Guiseppe and Luisa planted Zinfandel and Muscat Alexandria vines in 1887 on a steep, non-terraced hillside that became known as Jackass Hill Vineyard. The name derived from their son Leno who said, "nobody but a jackass would plant a vineyard there." This famous vineyard is the steepest non-terraced vineyard in Sonoma County.

When Guiseppe died, he left his spouse Luisa with four children. The youngest son, Leno, was determined to be a farmer and carry on the family tradition and after finishing school, farmed the Jackass Hill Vineyard. Leno continued to work the land and tend vines until 1949 at the age of 89 and turned the vineyard over to his son, Lee Sr. Today, Lee Jr. maintains the vineyard, representing the fourth generation.

During the 1980s, Lee Martinelli Sr. converted the family's apple orchards to Chardonnay and Pinot Noir grapes, noting a decline in apple sales due to competition from Washington State.

Two historic hop barns that grace the estate property were converted into a tasting room and winery and, the Martinellis began producing Pinot Noir under their own label in 1993, with Helen Turley as the winemaker. She introduced new viticultural and cellar practices to the Martinelli family and all new vineyards were planted with the consultation of John Welaufer and Helen Turley. Over time, older vineyards have been transitioned to high-density plantings.

Lee Martinelli, Sr. along with his two sons, Lee Jr. and George, oversee the management of the Martinelli family vineyards. The Martinellis own 20 vineyards and 400 acres of prime vineyard land in the Russian River Valley and Sonoma Coast appellations. 75 acres are planted to Pinot Noir. The Matinellis sell more grapes - about 90 percent - than are used to make their own wines.

Bryan Kvamme a University California Davis-trained winemaker was Turley's assistant at Martinelli Winery beginning in 1997, and became the winemaker starting in 2008 (with Turley as consulting winemaker). Turley left in 2010 and Erin Greene became the consulting winemaker. Courtney Wagoner replaced Kyamme as winemaker in 2017. Natural native yeasts are used in fermentations and the wines are unfined and unfiltered.

The Martinellis first planted Pinot Noir in the Fort Ross-Seaview AVA in 1995 (about the time they began producing wine under the family name). Lee Martinelli Jr.'s grandfather, George Charles, planted Chardonnay there in 1981.

After 42 years as CEO, Lee Sr. stepped down in February 2015, and was replaced by David W. Hejl, formerly of Kosta Browne and became the new CEO and General Manager. Lee Sr. continues to participate in the vineyard farming, along with his two sons, Lee Jr. and George. His daughters, Regina and Julianna, maintain their leadership roles.

The Pinot Noirs are bold, fruit-driven and highly structured wines. They are sold primarily through a mailing list with some wines available through the tasting room.

A tasting room, located in the Martinelli's historic Hop Barn is open daily from 10:00 to 5:00. 3360 River Road, Windsor. An adjacent hop barn has been converted into a winery. 707-525-0570. The wines are sold through a mailing list with some bottlings available at the tasting room. 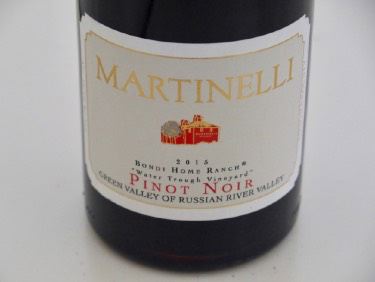 15.4% alc., $70. 23 acres of clones 114, â828,â 777, 667, 943 and Calera planted in Goldridge sandy loam soil. · Very dark garnet color in the glass. Aromas of black fruits, toast and vanilla creme. Full-bodied and luscious with copious purple and blackberry flavors supported by complimentary oak. The alcohol and tannins are well-integrated in this wine that could be mistaken for a Zinfandel. Well-made in this style that pleases with a slick and smooth mouthfeel.There is less acidity than wines from Green Valley typically offer but there is enough to propel the wine. Noticeably more mellow when tasted the following day from a previously opened and re-corked bottle. Score: 92. Reviewed January 20, 2018 ARTICLE »

15.3% alc., $70. This vineyard is named after Lee Martinelli Sr.âs uncle. Zico means âuncleâ in Italian and is pronounced âtseo.â At one time, this site was the largest apple orchard in Sonoma County. When Zico Tony passed away in 1971, his nephew, Lee Martinelli, Sr., took over management of the estate. This 45-acre vineyard was planted to Pinot Noir (115, 777 and â828â), Chardonnay and Syrah wine grapes in 2000, 2001 and 2006. Goldridge sandy loam soil. · Dark garnet color in the glass. Reserved aromas of blackberry reduction sauce, spice, raisin and redwood forest. A mid weight plus styled wine that has a bit more vibrancy than the Bondi Home Ranch bottling and more Pinot charm. The sappy fruit flavors of blackberry and ollaliberry are engaged with a welcome spice note. Very silky in the mouth, with good balance, finishing with willing intensity. Unchanged when tasted the following day from a previously opened and re-corked bottle. Score: 92. Reviewed January 20, 2018 ARTICLE »

14.9% alc., 738 cases, $40. · Moderately light reddish purple color in the glass. Aromas of cherry, red plum and sweet oak lead to a mid weight core of red and black cherry fruit. Very polished, with an aggressive oak overlay that dominates the finish. The fruit is vibrant and well-ripened and the wine is blessed with soft tannins that make it very approachable. Score: 89. Reviewed April 20, 2015 ARTICLE »

14.9% alc., $70. · The nose is loaded with oak toast and char which carries over on the palate. A rich core of dark fruits is quite pleasing but the toasted oak accent just doesnât appeal to me. The wine drank much better the next day from a previously opened and re-corked bottle with more oak integration and a brighter display of fruit. At room temperature, the finish is a bit hot. Decent. Reviewed February 15, 2010 ARTICLE »

14.7% alc.. · Secondary aromas of rotting leaves and barnyard. Austere plumy fruit, mushrooms and leather. The tannins are completely resolved and the wine is pleasingly soft. Drink up. Reviewed October 1, 2008 ARTICLE »