Wild Earth was established in 1998 and is a family owned business run by Quintin and Avril Quider. The 2006 Wild Earth PInot Noir (the third vintage of this wine) was awarded the coveted Top Red Wine trophy at the International Wine Challenge in London in September, surpassing thirty-one other red wine trophy winners from around the globe in the final judging round. Over 9,000 wines were submitted for judging making this the largest wine competition in the world. In addition to Top Red Wine, the wine won the award for Top International Pinot Noir, Top New Zealand Red Wine and Top International Red Wine. In May, the wine was awarded the Top New Zealand Pinot Noir trophy at the Decanter World Wine Awards. You might find the 2006 Pinot Noir sold out, but the 2007 vintage was released in September, 2008. Wild Earth wines are all estate-grown. Wild Earth owns 87 acres in two Central Otago locations - at the end of Felton Road overlooking the Kawarau River (the Bannockburn Estate) and the north Lowburn district beneath the Pisa Range (the Lowburn Estate). Intensive crop management practices are employed. The plantings include a mix of Dijon and UCD clones. For the 2005 to 2005 vintages, Michelle Richardson was the consultant to the winemaking and cellar team. Starting with the 2008 vintage, Grant Taylor joined Wild Earth as a consultant.

With the 2008 vintage, Wild Earth added a second label that is exported to the United States, Deep Cove. The winery's value-priced label is Blind Trail.

13.8% alc., $19, screw cap. Imported by San Francisco Wine Exchange, San Francisco. Sourced by Bannockburn Estate vineyards owned by the Quider family and other Central Otago vineyards. · Moderate reddish-purple color in the glass. Attractive aromas of strawberry pie, baking spices and balsam. Soft and smooth on the palate, offering a decent core of red berry flavors with a hint of tutti-frutti. This one is simple and direct and goes down easy. Decent. Reviewed November 7, 2010 ARTICLE » 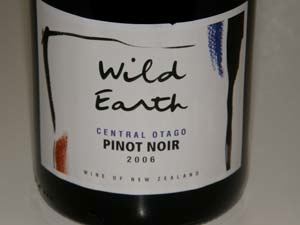 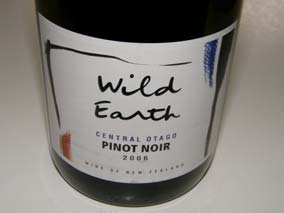 14.0% alc., $25, screw cap. Imported by San Francisco Exchange, San Francisco, CA. From vineyards on Felton Road and adjacent to Lake Dunstan. Crafted from 5, 6 and a range of Dijon clones. · A ripe, juicy, vivid and rich wine of great charisma. Great scent and flavors of fresh and sweet red and blue fruits. Supple tannins give it a caressing texture. A pretty Pinot that will charm the socks off you. Reviewed October 13, 2008 ARTICLE »