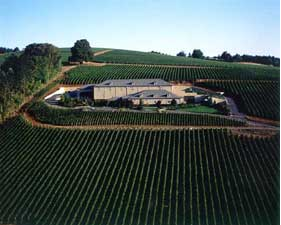 Established in 1993 by Pine Ridge Vineyards founders Robert "Gary" Andrus and Nancy Andrus Duckhorn, Archery Summit has a state-of-the-art 100% gravity flow winery. Two decades ago Archery Summit shook up the Willamette Valley establishment by released two 1994 Pinot Noirs at the then unheard of price of $50. The Archery Summit Estate Pinot Noir has been priced at $150 since the 2000 vintage.

Small temperature controlled fermentation tanks are used combined with an insistence on native yeast fermentation. The Pinot Noirs are aged for as long as 18 months.The winery's underground caves house over 550 French barrels.

Archery Summit has five estate vineyards and just over 115 acres. Moises Sotelo, a foreman who planted Archery Summit Estate in 1994, was replaced as vineyard manager by Leigh Bartholomew, who left in 2014 for Domaine Drouhin Oregon. His replacement was Tim Scott, the former vineyard manager at Domaine Drouhin Oregon. The vineyards are planted primarily in prime Jory soil in the Red Hills of Dundee with Dijon clones 113, 114, 115, 667 and 77 and are site-selected and blended with existing mature rootstock. The plantings are dense, vertically trellised, and sustainably farmed.

The long time winemaker and co-general manager until 2013 was Anna Matzinger. She was replaced by Christopher Mazepink. In 2014, M. Eleni Papadakis, formerly of Domaine Serene, was brought in as assistant winemaker.

Tours and tastings are offered by appointment daily from 10:00 to 4:30. Call 800-732-8822 for reservations. The address is 18599 NE Archery Summit Road, Dayton, Oregon. The wines are sold primarily through an allocation list, a wine club and the tasting room. Total production is 14,000 cases annually.

13.5% alc., $35.99. 100% estate grown and estate bottled. Sourced from five vineyards. · Moderately dark reddish-purple color in the bottle. At this early stage this wine is dominated by oak and tannin. Aromas of black cherries and coffee-scented oak. Soft in the mouth with a gentle cherry flavor, largely buried in oak and tannin. Tasted the next day from a previously opened and re-corked bottle, the lovely fruit core had begun to emerge and the oak was better integrated. Give this wine a few years in the cellar. Good. Reviewed September 12, 2012 ARTICLE »