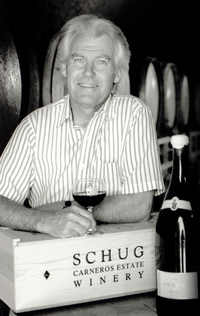 The founder of Schug Carneros, Walter Schug, spent ten years as the founding winemaker at Joseph Phelps Vineyards beginning in 1973 and created California's first proprietary Bordeaux-style blend, Insignia, and the first varietal Syrah in the U.S. He also made the vineyard designates Eisele and Backus, and pioneered late-harvest dessert wines. He was the first ever to receive a 99-point score from wine critic Robert Parker, Jr..

Schug's real passion was Pinot Noir. Phelps discontinued producing Pinot Noir in 1980 and Schug began making it the same year under his own label. Ten laters later, he built Schug Carneros Estate Winery near the town of Sonoma and by 1992 was making estate Chardonnay and Pinot Noir. Walter and his wife Gertrud were joined by son Axel in 1989 who directed the sales and growth of the winery in the ensuing years and is currently the managing partner.

Schug is the "winemaster emeritus" today while Sonoma-born Michael Cox has handled the winemaking duties since 1995. For Pinot Noir, they use German plunger fermentation tanks and European oval oak casks in addition to small French oak barrels. The style here has always emphasized elegance and age ability. Schug's 50th harvest is in 2013.

The Schug lineup of Pinot Noir, Pinot Noir Rosé, Cabernet Sauvignon, Merlot and Chardonnay are sold on the website and distributed nationally. The winery's tasting room at 602 Bonneau Road in Sonoma is open daily from 10:00 to 5:00.

14.1% alc., $30. · Moderately light cherry color in the glass. Aromas and flavors of oak-dusted cherry and strawberry with a savory streak in the background. Juicy, refreshing finish. Score: 88-89. Reviewed April 4, 2015 ARTICLE »

14.0% alc., $24. · Moderately light ruby color in the glass. The nose is dominated by aromas of oak, smoke and herbs with cherries and berries in the background. A darker fruited wine that is more savory than fruity with prominent smoky oak initially. Much better the following day from a previously opened and re-corked bottle showing more vibrant fruit and less oak. Very âBurgundianâ in style. A silky texture makes for easy drinking and the bright acidity lifts the finish. Good. Reviewed July 1, 2011 ARTICLE »

7,387 cases, $28. This wine is sold on the website. · Enticing scents of Bing cherries, strawberries, and cedary oak. Decent core of red fruits kissed by savory herbs. Plush in the mouth and velvety in texture. Reviewed April 18, 2009 ARTICLE »

13.5% alc., $28. · A simple but satisfying Pinot Noir featuring cherry and berry fruit, a sprinkling of herbs, a hint of smoke and a touch of citrus. Moderately light in body with silky tannins and a clean finish. A perfectly fine daily drinker. Reviewed February 12, 2009 ARTICLE »