If you get the opportunity to hear John Haeger speak about Pinot Noir, jump at the chance. He is a very literate academic who is also quite humorous and happens to know more about the Pinot Noir grape than anyone else on this planet. Although his talk was titled as above, he focused on “Top Ten Reasons to Love (or Hate) Pinot Noir” to make his points. 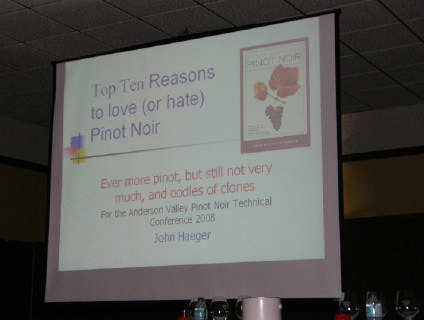 #10 Pinot Noir remains the most lightly planted grape varietal in the world. It is low-yielding, small-berried, thin-skinned and disease-sensitive.

#9 If Pinot Noir is mistreated, it will retaliate.

#7 Pinot Noir smells or tastes like almost everything good and bad. It mimics everything on the aroma wheel.

#6 Pinot Noir attracts more “purple prose” than any other variety.

#5 Pinot Noir befuddles critics. Nobody knows what is supposed to taste like.

#4 Finally more and more is being planted. There has been a doubling of planting in the last 40 years, not in Burgundy’s Cote d’Or , but in Champagne, Languedoc (huge amounts), and Corsica. There are widespread reports that a new Two Buck Chuck Pinot Noir will come from Corsica. Plantings have also increased in Germany and in Switzerland. There has been a doubling of Pinot Noir plantings in Germany in the last 20 years, and close to a doubling in Switzerland. Some of the new plantings is replacing white grape acreage. In the last ten years there has been a marked increase in Pinot Noir acreage in New Zealand as well.

#2 If you love Pinot, which Pinot? All Pinot Noir came from a common source - one alpha vine - either a domesticated wild vine or a wild vine crossed with a previously domesticated vine or a neutral crossing of two previously domesticated varieties or a lab crossing of two varieties. It first showed up in southeast France but not certain if it was Burgundy. Pinot Gris, Pinot Blanc and Pinot Meunier are color mutations of Pinot Noir, not offspring - all have the same parentage. “Clone speak can make you nuts.” It is a jungle of alphanumeric shorthand. There are more than 800 clones of Pinot Noir in conservatory collections in France. Of those, 43 are “approved.” 31 of the 43 are widely distributed. 21 of the 43 +3 have UCD/FPS numbers. Haeger looked at all of the Pinot Noir vines ordered from California nurseries in 2006-2007. Not all nurseries responded but the following is clear. There were large orders for clone 23 (Muirfield selection) in 2007 heading to Lodi and contracted to Gallo which is an astonishing finding. Other orders were primarily for Pommard and Dijon (particularly 828 which is the newest thing) clones. Eventually all clones will be doomed to further mutation and the puzzle will continue to become more muddled and confusing. Despite all of the interest and emphasis on Pinot Noir clones, it is clear that site trumps clone selection.

#1 People who make Pinot Noir are on the lunatic fringe. Enough said. 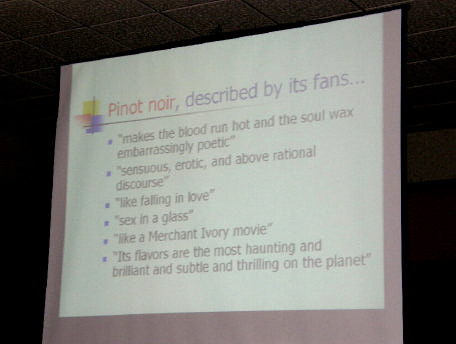 State wine shipping regulations vary considerably from state to state and are still being actively legislated in many states. If you have questions, consult Annie Bones at abones@wineinstitute.org or visit the website at www.wineinstitute.org, where a state-by-state carrier status listing is available on the Wine Institute website. Lets keep praying for as much reciprocity as possible.

Vitis vinifera is one of the most drought tolerant and lime-salt tolerant Vitis species. There are a variety of rootstocks available, all offering differing amounts of vigor, varying degrees of resistance to phylloxera, shallow or deep roots, and varying nematode resistance. Dr. Walker, a professor and geneticist at University California Davis has been working over fifteen years to develop five new rootstocks that are resistant to nematodes, aphids and other insects. The rootstocks have been licensed for eventual sale (2010) by certified nurseries to vineyards. It is hoped that the new rootstocks can be grafted to vinifera vines that are susceptible to these pests. Currently, Walker is recommending that vineyards be planted to multiple rootstocks that are appropriate to the site, particularly ones that are pest and drought resistant.

A few observations came out of this excellent discussion about realizing Pinot Noir’s phenolic potential through viticulture.

* The quality of Pinot Noir improves as vine vigor decreases

* The management of tannins has become critical in viticulture as consumers look at texture as one of the most important determining factors in evaluating the quality of Pinot Noir.

* Biodynamic/organic farming creates a tremendous amount of life form in the top soil - a teaspoon of soil contains one million bacteria, several yards of fungal hyphae, many protozoans, and nematodes.

* Biodynamic/organic farming helps balance the vineyard, supports biodiversity and competition, makes vines tougher and better buffered for tough times, and forces the grower to do cultural practices on times.


Following the conference, a casual barbecue was held at Standish Winery at the Day Ranch in Philo. Attendees brought a wine or two to share so there was plenty to choose from. The buffalo burgers were just the thing for some good Anderson Valley Pinot Noir. Standish Winery (the tasting room is upstairs in an old redwood apple drying barn - pictured) was founded in 2004 by Ken and Miles Oswald, longtime grape growers and winery principals. The winery sits on the Day Ranch which was purchased by the Oswalds from the Day Family in 1978. The Oswalds are distantly related to the famous Mayflower pilgrim, Miles Standish. 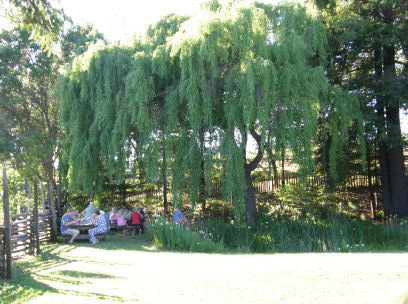 
Nearly 40 producers were pouring under the big tent at Goldeneye Winery in Philo on Saturday, May 17. There was a convivial atmosphere as attendees strolled through the tent, sampling both latest releases and library wines. A gourmet luncheon was offered and thankfully there was plenty of water. It was about 100°F and tasting large amounts of Pinot Noir is extremely challenging under these conditions. One needs water to combat the drying effects of both alcohol and the heat and I think I went through at least eight bottles over a couple of hours and still didn’t need to pee! That said, I enjoyed myself immensely and I came away quite impressed with the general quality of the Pinot Noirs.

The Anderson Valley’s validation as a premium grape-growing area was first established by Roederer Estate in the early 1980s and subsequently by Schraffenberger. Both made stellar sparkling wines from clones planted for their value in making bubbly. In recent years there has been an emphasis on cultivating Pinot Noir clones appropriate for still wine and widespread adoption of modern viticulture advances. The result has been that the current class of Anderson Valley Pinot Noirs can hold their own with any appellation in California. Winemakers and the trade seem to realize it, but the public perception has lagged. With the small number of wineries and the anti-development attitude that pervades the valley, recognition has been slow in coming. Retirees and urban refugees who are seeking the wine lifestyle won’t find the creature comforts of Napa or Sonoma in Anderson Valley. Many visitors to the valley simply pass through on their way to the Mendocino Coast, stopping only at a few visible tasting rooms. Be advised, however, that this region and its marvelous wines are worth exploring and I would encourage you to visit, lounge and really chill out a few days, and see what Pinot Noir can really do here. 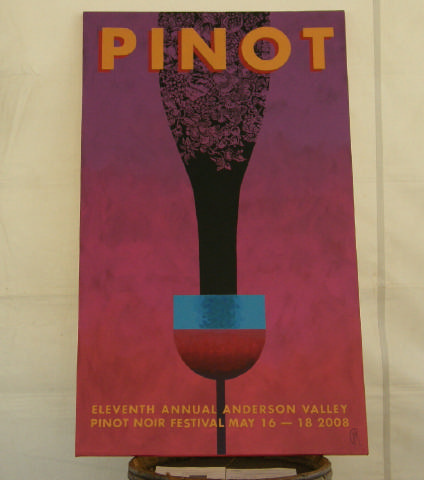 The Pinot Noir wineries of Anderson Valley are profiled in the following pages. Because of the heat on the day of the Grand Tasting, I did not get to sample the Pinot Noirs from every producer present. For some of the ones I missed, I tasted their wines at home after the event. In addition, I tasted a number of releases from wineries outside the Anderson Valley who source grapes from within the appellation. Like any appellation noted for Pinot Noir, there is a multiplicity of styles ranging from wines that are forward and drinkable upon release to ones that need years to uncover deep-seated complexities that lie within. There is something for everyone in the valley. Most of the producers' Pinot Noirs are very sensibly priced and are worth pursuing. If you visit, be prepared to make an effort, as some wineries are hidden in the hills several miles from the main thoroughfare and only reachable by lengthy, but scenic, dirt roads. 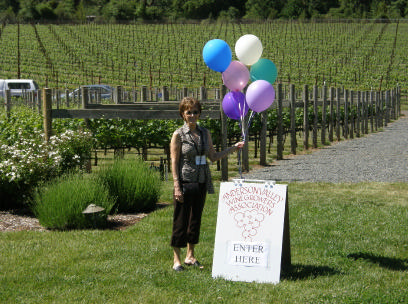 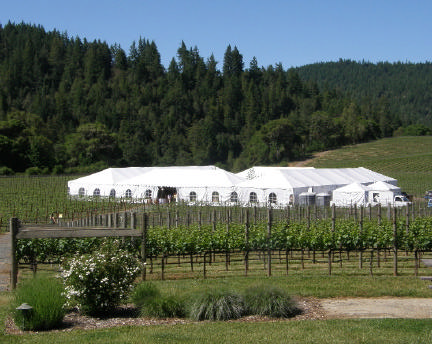