Mendocino Ridge is a newer American Viticultural Area winning approval in 1997, yet has some of the oldest producing vineyards in Mendocino County. The first plantings, primarily Zinfandel, were established by Italian immigrants and date to the late 1800s. Today, Zinfandel is still the pride of this AVA, but the area holds promise as California's newest “hot spot” for Pinot Noir.

The Mendocino Ridge AVA is a non contiguous trio of ridges that is defined by vineyards at least 1,200 feet or more in elevation and within 10 miles of the Pacific Ocean. It is California's first and only non contiguous AVA. Because of the hilly terrain of the AVA some lower elevations are not included, fostering the name, “Islands in the Sky™.” This catchy name is trademarked by Dan Dooling, owner of Mariah Vineyards, and one of the winegrowers along with Steve Alden of Perli Vineyard to successfully achieve appellation status for the region. The ridge is a twisting 12 mile uphill westward drive along Philo Greenwood Road from the Anderson Valley floor. Refer to map on page 2.

The climate is different from the Anderson Valley below. Perched above the fog and frost threat, the vineyards bask in the early morning sun, and early afternoon breezes cool down the fruit, never allowing the temperatures to rise as high as the valley below. The diurnal variation during the growing season is significantly less than the valley below (20 degrees versus 40 degrees). There is enough rainfall and ground water to dry farm vineyards. According to winemaker Van Williamson of Edmeades, “Mendocino Ridge grapes produce wines intense in fruit, high in acidity and structured for aging in the cellar.” 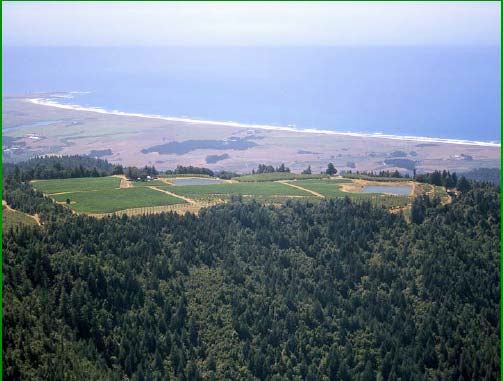 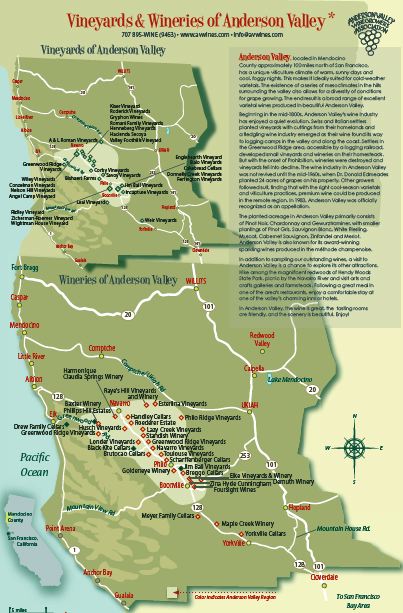 Most of the vineyards in the Anderson Valley are less than 10 acres, with three large growers, Roederer Estate, Goldeneye and Navarro controlling the most total vineyard acreage. Pinot Noir acreage has dramatically increased since 1997, and now accounts for more than 50 percent of Anderson Valley’s vineyard plantings.