These wines were uneven in quality with the last three vintages (2004-2006) technically more sound and fresh. All wines retained a moderately deep reddish-purple color. The tasting group did not consider any of the wines exceptional with the 2004, 2005 and 2006 vintages being clearly the group’s favorites among the young wines and the 1998 vintage the best by consensus among the older wines. 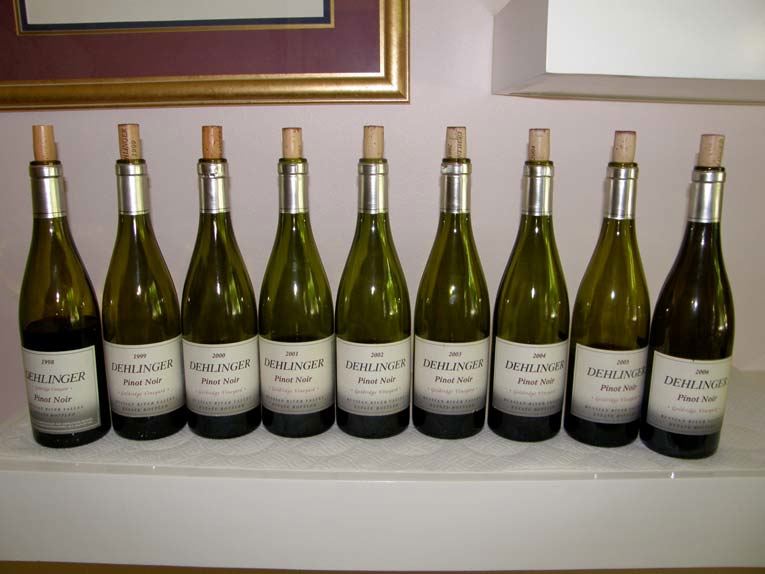 14.3% alc., 1,290 cases, $35. · Aromas of raspberries, cherries with a hint of oxidation. On the palate, pleasing and savory berry and black cherry flavors with a slight grilled fruit and citric note. The wine died quickly in the glass.

14.5% alc., 1,340 cases, $35. This vintage was softer, less weighty and more succulent early. · Vivid scents of berries and cherries with a floral note. Moderately rich with a tasty core of berries finishing with a tang and some persistence. Still showing some tannin but time to drink up. Faded slowly over three hours.

14.3% alc., 1,600 cases, $35. · Slightly oxidized with aromas of soy and forest floor, and flavors of roasted fruit and nuts and raisins. Unappealing.

14.4% alc., 1,300 cases, $36. Aged in barrel 16 months. · Just can’t get past the nose on this wine. While there are some pleasant blueberry and cranberry fruit aromas, there is also a strong smell of tequila. Soft in the mouth with supple tannins and restrained flavors of raisined berries.

14.9% alc., 1,300 cases, $39. · Pure and bright raspberry aromas with a hint of graham. Propelled by the alcohol, the rich fruit has a sweet fullness and lengthy persistence on the finish. Packed with pleasure, but retaining an elegance with gossamer tannins and pleasing acidity. A very good drink.

14.5% alc., 1,250 cases, $40. · This is a very age worthy wine that is richly endowed with Pinot fruits and still retaining noticeable oak and tannin. Very smoothly textured and light on its feet. The most harmonious wine in the lineup. Can drink now for its fruity youthfulness, but will go another 6-8 years.

1,600 cases, $44. · Great scent of raspberries, cherries, cola and a hint of oak.. Spicy, tenacious palate of mouth coating cherries and cranberries with a sidecar of oak. Lovely depth with an appealing restraint, featuring a soft, smooth mouthfeel. Pretty damn good.

All the wines had a moderately deep reddish-purple color, bright acidity, and a sweet fullness from the moderately high alcohols. Impressive for their consistency, these wines are a step above the Goldridge Vineyard in complexity, finishing persistence and age ability. I would be happy to drink any of the wines today, but if I can find any of the 2004 vintage, I am buying all I can get my hands on. 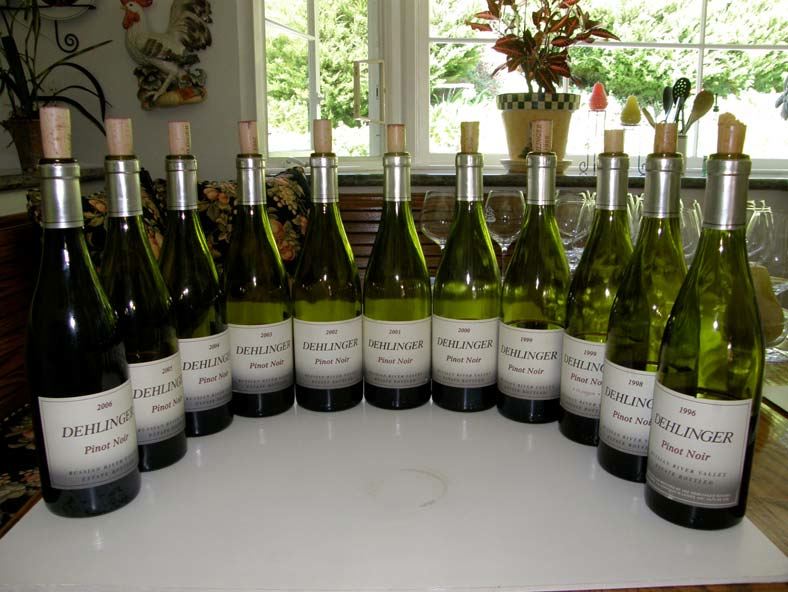 14.5% alc., 990 cases, $32. Low yields in this vintage. Aged 20 months in French oak. · Slightly cloudy with an orange-brown tinge to the rim in the glass. Wonderful secondary bouquet of plums, blackberries, mushrooms, forest floor and cigar box. Dark fruited and only slightly faded with a background of earth, oak and anise. Still drank well two hours after opening. Impressive.

14.5% alc., 1,050 cases, $40. · Darkly colored with a slight orange tinge to the rim in the glass and a mild haziness. Plenty of barnyard initially which blows off revealing aromas of black raspberries and blackberries. Rich and full-bodied, dark fruit driven, with some fading and flatness to the fruit profile and a short finish.

14.8% alc., 1,260 cases, $42. · Slight haziness in the glass. Lovely scent of red plums, raspberries, vanilla and cream soda. More acidity in this wine allowing it to drink fresh and young with an appealing core of fresh berries underpinned with a citric tang. Very good.

14.6% alc., 1,600 cases, $40. A cool growing year with a record crop. Sourced from Altamont soil series only. · The nose draws you in with a perfume of crushed Bing cherries, raspberries and cola. Lovely depth and richness of flavor with plenty of sweet, fresh, vivid fruit and a deft touch of oak. A very pretty wine that is drinking perfectly now. One to dance with all night.

14.4% alc., 1,300 cases, $40. · Darker red fruits and marzipan mark the aromas and flavors. A bigger, darker wine than 2000 with copious sweet fruit and a remarkably persistent finish. Starting to fade 2 hours after opening.

14.7% alc., 1,300 cases, $40. Includes High Plains section of vineyard. · Sweet scented nose of dark berries and green garden. On the palate, the generous fruit tastes of mu shu plum sauce. The tannins are supple and the whole package is very harmonious. This wine didn’t illicit emotion, but is very solid and holding up nicely.

14.4% alc., 1,300 cases, $42. Octagon and High Plains sections of vineyard included. · Very floral nose with overtones of tequila. The flavors trump the nose with a rich parade of full-bodied dark red fruits that are smoothly textured and framed by reigned-in tannins. My least favorite of the vertical tasting.

14.9% alc., 1,150 cases, $45. · Complex nose with the scent of freshly crushed berries accompanied by notes of cherries, toast, brioche and spice. Mouth coating blue and black fruits that find every nook and cranny in the mouth linger on the finish for what seems like a minute. Notes of cherry cola and sassafras add interest. A very hedonistic, yet caressing wine. The alcohol is well balanced by harmonious t n‘ a. Still drank great a day later from a previously opened re-corked bottle predicting a long life ahead. This wine makes you want to clap your hands.

14.6% alc., 850 cases, $45. Low yields due to poor set so no reserve or special bottlings this vintage. · Bright berries, cherries and vanilla cream on the fresh nose. Earth-kissed fruits on the palate showing youthful exuberance with a touch of sweet oak. The texture is very polished. Still drank fine the next day from a previously opened re-corked bottle.

14.9% alc., 1,300 cases, $48. A blend from three of the four hilltop locations (omitting the High Plains). · Still very young and unyielding. Swirling the wine brings out scents of earthy dark red fruits, smoke and dark mocha. Richly fruited with a moderate tug of dry tannin. The earthiness of the wine trumps the fruit at this stage. After 2 hours, the wine begins to blossom with expanding flavors of savory fruit and a touch of spice. A wine to cellar for now, knowing but that it has tremendous future potential.

12.9% alc. $50 (current secondary market). · Slight brick color to rim. Very nice aromas of black cherries, seasoned oak, toast and leather. Tart cherry and cranberry flavors displaying a faded, earthy character. Lingering grapefruit peel on the finish with minimal tannins. Some charm but the fruit is diluted and the acidity has come to the forefront.

13.5% alc. $50 (current secondary market). The back label says, “A soft, medium-bodied blend which is ready to drink.” · Still retaining good color with a very slightly brick-colored rim in the glass. Charming nose of cherries, cinnamon spice, sandalwood, aged oak and cigar smoke. Roasted cherry and cherry cola flavors with notes of berries and tobacco. The tannins are completely resolved with some mild persistent acidity. Soft and smooth in the mouth with a touch of astringency on the finish. Some interest and surprisingly respectable longevity.

14.6% alc., $50. Aged 18 months in French oak. · Slightly hazy in the glass. A gorgeous wine in all respects that is drinking perfectly now. Attractive aromas of mixed berry and cherry jam that make you want to go on sniffing. Juicy and succulent, darkly fruited, with that appealing Pinot sweetness. Nuanced flavors of cola, tea and truffle. The well-endowed tannins are fine-grained and the finish is ridiculously long. A ten-year-old wine that has aged beautifully and is special in every way.

14.6% alc., 430 cases, $30. · Demure scents of cherries, herbs and faint oak. Very tasty cherry core with an appealing earthiness flanked by baking spice ending with a citric tang on the finish. Not intense like so many reserve bottlings, rather offering more charm and sophistication. Plenty of finesse and proper t n’ a to last another 3-4 years. Lovely age related patina with fruit flavors that have been seemingly simmered for several years. A wonderful wine.

14.5% alc., 225 cases, $48. Sourced from 13 year old Pommard vines. · Delicate scents of cherries, spice, oak and green garden. Delicious cherry core with a slight fennel note that is complimentary. This wine has that Dehlinger restraint - an elegance that makes Pinot Noir so appealing. The wine is still holding enough structure to last another five years. A terrific wine that could stand up to any 2001 1er Cru Burgundy.

The following information was obtained from the biannual Dehlinger newsletters and is not complete.