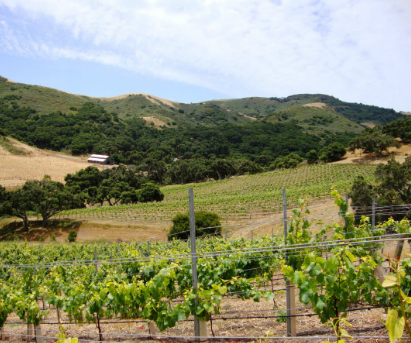 Both Bartholomew and Reuter were accepted into the viticulture and enology program at UC Davis but with time to kill before school commenced., they headed to the Southern Hemisphere for harvest. Upon return to the United States, they immersed themselves in the two-year program at UC Davis. After graduation, they worked at Mondavi and ZD wineries and a harvest in Gevrey-Chambertain. They returned to Oregon in 2000. Reuter went to work at Rex Hill and Batholomew landed a job at Archery Summit after their first son was born.

The winery, Domino IV, is a name based on fours: a labyrinth with four quadrants is on the label, they make their wines from four varieties, the year has four seasons, and the wines are released four times a year. A second son was born, so the family consists of four people.

The 15-acre estate Three Sleeps Vineyard is on a 37-acre parcel near Mosier, Oregon. They have been adherents to biodynamics. 8 acres are planted to Tempranillo, viognier and Syrah and one acre is laid out like a labyrinth. Pinot NOir is sourced from Yamhill Valley sites including Stermer, Bella Vida and Maresh vineyards. Bartholomew continues to work at Archery Summit.

The winery in the Granary District of McMinnville is open for visitors on Saturdays 12:00 to 5:00 and by appointment. A Bed and Breakfast is also now open. The wines are sold through the winery's website store and are well-priced. In 2012, production was 3,500 cases.

13.8% alc., pH 3.65, TA 0.55, 148 cases, $36. Released November 2016. Vineyard is surrounded by old growth Douglas Fir trees. Willakenzie silty clay loam soil. Harvest Brix 24.4Âº. Clones 777, Pommard and WÃ¤denswil. · Moderately dark reddish purple color in the glass. Shy, but very pleasing aromas of black cherry, spice and brioche. Very polished on the palate, in a mid weight plus style, offering delicious flavors of black raspberry, black cherry, plum and pomegranate. The wine has a strong backbone, yet the tannins seem to be fruit based and not bitter. The finish is notable for its generosity and glorious fruit persistence. This is quite an indulgent charmer and a great value to boot. Score: 93. Reviewed February 1, 2017 ARTICLE »

14.2% alc., $25. · Light and red-toned in the glass. Aromas of brier, oak, cut flowers, red licorice and rose petals with little fruit showing up. Moderately light core of cherry and red raspberry flavors with a slightly confected and vegetal tone. Pleasant, with mild tannins and easy quaffability. Decent. Reviewed May 11, 2012 ARTICLE »

13.5% alc., $32. Pommard clone. · Moderately dark reddish-purple color in the glass. Restrained aromas of dark red fruits with notes of sassafras, molasses and oak. Drinks lighter than expected by the color, offering a silky palate impression and reasonably good length on the finish. Features dark red berries and cherries accented by oak with lively acidity and ripe tannins. Like many Pinot Noirs from Oregon in the 2008 vintage at this stage, the wine is a bit closed and needs coaxing through decanting to fully reveal its charms. Good (+). Reviewed May 11, 2012 ARTICLE »