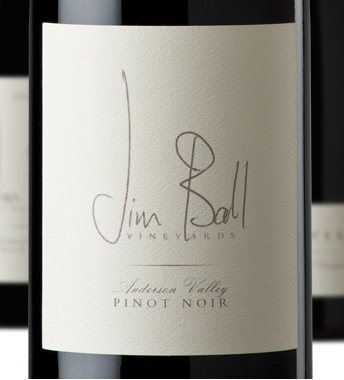 Chicago attorney Jim Ball has a love for Pinot Noir and the Anderson Valley. He bought land in Anderson Valley in 1999 and built a 10,000-case winery on Highway 128 across from Goldeneye Vineyards. He ran the winery with his long time assistant Tanya Wilber. Beginning in 2002, he began a staged planting of Pinot Noir vineyards totaling 44 acres include a remote vineyard in the Anderson Valley named Middleridge Ranch and the Four Dog Ranch Vineyard adjacent to the winery. Greg LaFollette was involved initially and made the 2006 vintage, but has since departed. Ball then brought biodynamic viticulturalist, Ginney Lambrix, to supervise vineyard development, maintenance and winemaking. 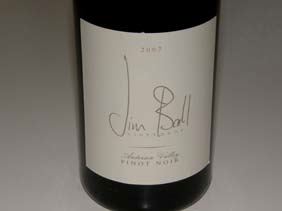 14.5% alc., $30. · Subdued but pleasant scents of black cherries and oak. The oak influence carries through on the palate. Decent cherry and berry tastes backed by savory herbs with a finish that is short and dry. Not up to the quality of the 2006 vintage bottling of this wine. The wines are sold through a mailing list at www.jimballvineyards.com with some retail distribution. Reviewed September 19, 2009 ARTICLE »

14.5% alc., $46. · Moderately deep garnet color. Very intense aromas of cherries and berries with Provencal spices. Rich and ripe berry and stone fruit flavors augmented by notes of tar and grilled meat. Smoothly textured with fine dusty tannins and a clean finish. A hardy wine with more gumption than the 2006 vintage. It will improve over the next year or two yet is drinking fine now. Reviewed June 5, 2009 ARTICLE »

14.5% alc., 690 cases, $60. From the 10-acre Middle Ridge Vineyard, located at 1,200 ft on a south facing Anderson Valley hillside just outside of Boonville. Clones 115, 667,777,828 and Pommard 5. Inaugural release. · Shy but sexy scent of red cherries and oak spice. Delicious cherry and strawberry fruit, nicely spiced with gossamer tannins and a tangy finish. Delicate and elegant with impeccable balance. A ballerina in full flight. This is an up and coming producer of great promise. Reviewed January 1, 2009 ARTICLE »

14.5% alc.,$60. · This wine actually startled me by its charm. An impressive inaugural effort that showed great breeding. Gregarious red fruit and spice that delivered plenty of perfume and flavor, yet was light on its feet. The whole Pinot package. Reviewed June 9, 2008 ARTICLE »