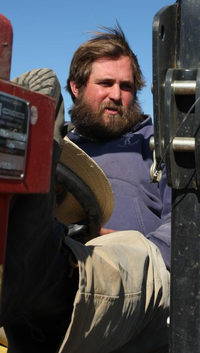 The story of Siltstone Wines begins in Sacramento, California. The Myers family, parents Tucson and Lonnie, and sons Mark and Joel, lived across the street from Charles and Shirley Coury and their two boys, Brad and Charley. Charles was studying Enology and Viticulture at University of California at Davis, and was finishing his Masters thesis on cool climate viticulture. Through the Courys, the Myers met other young students in the University of California at Davis program including Werner Koblet and David Lett.

In the mid 1960s, Joel's father accepted a position with the State of Oregon and moved his family to Silverton, Oregon. Both Coury and Lett had moved north and were establishing vineyards. The Myers family frequently visited the Courys and Letts.

Joe grew up in Silverton and worked on farms since the age of 10. One of his first jobs was to help the Letts plant and trellis their vineyards in the Dundee Hills in the mid 1960s. Joel took a semester off from college in 1976 to visit vineyards, research stations, and wineries in Germany, Austria and Yugoslavia with Charles Coury.

In 1979, Joel graduated from the University of Oregon with a degree in Geography and Environmental Science. His first job was a harvest position in the vineyard of David Lett at The Eyrie Vineyard. He subsequently became a full-time vineyard and cellar manager.

Joel met Louise Bernards, a teacher and artist from a local farm family, who was working for the Letts as well. They were married in 1981 and traveled to Switzerland, where Joel worked with Dr. Werner Koblet, David Lett's colleague from University of California at Davis. Koblet was one of Europe's leading researchers in viticulture. Joel developed extensive know how in vine physiology, disease control, and clonal studies and returned to Oregon with a renewed interest in the potential for Oregon viticulture.

Stilstone's first vintage was in 2000 which Joel has carried on successfully with his wife Louise, and sons Joey, John and David. The wines are sourced exclusively from Guadalupe, Blacktail and Hyland vineyards and include Pinot Noir, Pinot Gris and Riesling.

The wines are sold by contacting John Myers at 971-241-2548 Monday through Friday 8-4. There is some retail and restaurant distribution in Oregon, Washington and California. Siltstone has a tasting room at 213 Pine St. in Carlton opening in the spring 2014.

13.0% alc., $20. Produced from the Myers Family vineyards. The Myers Family owned Familys and Vinetenders farming company has been growing wine grapes in the Willamette Valley for more than 35 years. · Moderately light garnet color in the glass. Aromas of dark cherry, raspberry, earthy flora and a hint of oak. A straightforward, simple wine with mid weight flavors of black cherry and subtle oak char. Modest tannins, smoothly textured, with unassuming acidity and a short finish. Score: 87. Reviewed May 10, 2018 ARTICLE »

12.7% alc., $20. From Joel & Louise Myers and sons. · Light reddish purple color in the glass. The nose is rather pungent, offering aromas of earthy flora and herbs. Light to mid weight in style, with a core of herb-infused maraschino cherries framed by filigree tannins. The fruit has an under ripe character. Score: 86. Reviewed August 29, 2016 ARTICLE »

13.8% alc., $32. Joel and Louise Myers & Sons of Vinetenders manage this vineyard for owners Jim Stonebridge and Kathleen Boere. · Moderate reddish purple hue in the glass. Haunting aromas of black cherry, wilted rose, wine cave and wet stones. Plenty of fruit sap, boasting concentrated flavors of black cherry and black raspberry with an earthy underpinning. Much bigger than the previous two vintages, filling the mouth with pleasure and departing with a generous amount of fruit goodness and some dry tannin residue. A bold wine that dances on its toes. Score: 91. Reviewed March 29, 2014 ARTICLE »

13.9% alc., 230 cases, $30. Vineyard owners are Jim Stonebridge and Kathleen Boeve and the vineyard is managed by Joel Myers of Vinetenders whose family produces this wine. · Medium reddish-purple color in the glass. Intense and very appealing aromas of black cherries, black raspberries, ollalieberries and dark chocolate. Soft, smooth and ambrosial, with middleweight flavors of well-ripened dark cherry and berry fruits with complimentary accents of Asian 5-spice, cinnamon and toasty oak. Balanced, ripe tannins and a powerful, lasting finish complete the picture. I have been very impressed by this wine over the past three vintages. It seems to fly under the radar, yet is deserving of a bigger audience. Remarkably, the winery is still offering the 2007 and 2008 vintages of this superb wine. If you want a wine that typifies the Dundee Hills, this would be an excellent choice. Reviewed November 24, 2012 ARTICLE »

13.2% alc., 380 cases, $28. Released May 2011. Viticulturist Joel Myersâ own label. His company, Vinetenders, manages Guadalupe Vineyard for owners Jim Stonebridge and Kathleen Boeve. · Moderately light reddish-purple color in the glass. Evocative aromas of red berries and cherries on a bed of mesquite. Vibrant flavors of red raspberries and Bing cherries with a hint of caramel and spice that fan out nicely on the palate in an elegant presentation. Very forward for this vintage. Long, scented aftertaste. An exceptional wine of great pinotosity. Reviewed May 11, 2012 ARTICLE »