Jim Bernau (pictured right) founded Willamette Valley Vineyards in the southern Salem hills in 1983, planting Pinot Noir, Pinot Gris and Chardonnay in the central Willamette Valley in Turner, Oregon. A home winemaker and small business lobbyist at Oregon's State Capital, he cleared the blackberry vines and remnants of a plum orchard himself and remembers watering the fledgling vines with a garden hose by hand. Initially he sold his grapes to Dick Erath. The winery quickly grew into Oregon's leading producer of wines selling at $15 and above only three years after its first release of Pinot Noir. Today, Willamette Valley Vineyards is the third largest Oregon Winery by brand and production releasing approximately 111,700 cases of wine each year. About half of the production is Pinot Noir. The winery now has over 4,500 owners, a result of the nation's first successful self underwritten public offering (1989, Nasdaq WVVI). Jim Bernau was named Purveyor of the Year in 2007 by the Oregon Restaurant Association for his tireless lobbying for the Oregon hospitality industry.

The Estate Vineyard consists of 50 acres of Pinot Noir planted to Pommard and Wädenswil clones. The winery and underground cellar are carved into the top of an ancient volcanic flow. In 1997, Willamette Valley Vineyards acquired Tualatin Estate, near Forest Grove, and plantings there have been increased using new rootstocks and Dijon clones of Pinot Noir. Both the Estate and Tualatin Vineyards are are certified LIVE and Salmon Safe.

The current winemaker is Forrest Klaffke, brought in from California by former Willamette Valley Vineyards winemaker Dean Cox. Forrest was promoted to winemaker several years later after Joe Dobbes, the winemaker who followed Cox, started his own Oregon winery in late 2001. Forrest has now worked in wineries for over 28 years. He spends a considerable amount of time attending to every detail in the vineyards. Vineyard Manager Efren Loeza began his career at Tualatin in 1979 at 17 years of age and has worked in the vineyard and in the cellar there ever since. Efren lives on the estate in the farmhouse built by the original owners of the property. He now has nearly 300 acres under his supervision.

This is an innovative and progressive winery. In 2005, they were the first winery to include resveratrol levels on their wine labels. More recently, they became the first winery to use cork stoppers harvested from forest lands certified by the Rainforest Alliance to Forest Stewardship Council (FSC). The company has launched a cork recycling initiative with Amorim and recycles used wine bottles. In the past the winery made its own fuel and now use bio-fuel from a potato chip plant.

I sampled four 2006 vintage Pinot Noirs from Willamette Valley Vineyards. All the wines had alluring aromatics and were beautifully balanced. This is a label, despite its large size, you can rely on for consistently fine wines. The general winemaking regimen for Pinot Noir is as follows. The grapes are de-stemmed with approximately 50% to 70% of the grape berries remaining intact for intra-berry fermentation. A four to five day cold soak of the must is followed by inoculation with proprietary yeast. Fermentation progresses in small lot .5 ton and 1.5 ton vessels (for the Willamette Valley blend, 10 ton vessels are also used). Hand punch downs of the cap are employed in the smaller vessels, pneumatage in the 10 ton fermenters. The wine is racked to barrel where it finishes primary fermentation and undergoes MLF. The Willamette Valley blend and the Estate Vineyard bottling are filtered and the Tualatin Estate and Signature Cuvee are unfined and unfiltered. 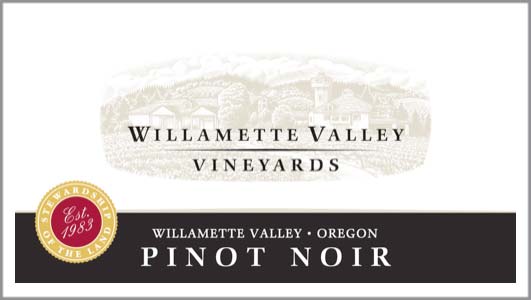 14.5% alc., 2,534 cases, $40. Clones are 667, 777 (both grafted in 1993), Pommard and Wädenswil. The vineyard, which was originally planted in 1983, has 50 acres of vines on Nekia and Jory soils that are well drained. Aged in 35% new oak. · Dark cherries, dried herbs and char lead the aromatic charge. A healthy core of black cherry and black raspberry fruit with a sidecar of savory herbs and oak char. Soft and bright in the mouth with a refreshingly clean finish.

14.5% alc., 402 cases, $40. Tualatin Estate Vineyard is one of the oldest vineyard sites in Oregon · This is a fascinating wine. The nose offers aromas of cherries, grass and herbs, primarily sage. Deep, dark, earthy and plush in the mouth, with a panoply of dark stone fruits and a hint of game and smoke. Plenty of stuffing here but not overwrought and retaining lively acidity at the end. The tannins are evident (the most tannic wine of the lineup), but are soft and add needed backbone. This wine would match beautifully with hearty dishes such as lamb, venison and a well-grilled steak.

14.5% alc., 321 cases, $50. Clonal mix is 114, 115, 777, Pommard and Wädenswil. Aged in 40% new oak. A limited bottling produced only in the finest vintages from the finest barrel lots of vineyard-designated Pinot Noir. · This wine is all about black cherries pure and simple although some strawberry and herbal flavors chime in as well. A very high-class wine with admirable elegance, gossamer tannins and striking persistence on the finish. Smooth as a baby's bottom.

Willamette Valley Vineyards address is 8800 Enchanted Way, SE, Turner, OR. The phone is 503-588-9463. The wines are widely distributed in the United States and are sold on the winery's website at www.willamettevalleyvineyards.com. A tasting room is open from 11-6 daily. Tours are by appointment. The Willamette Valley appellation blend is consistently a fine value in quality Oregon Pinot Noir. The Tualatin Estate and Signature Cuvee bottlings are only sold in the tasting room and offered as a benefit to the winery's wine club (Oregon Wine Guild) members.

The Winderlea (Win-dur-lee) Vineyard was formerly known as the Dundee Hills Vineyard when it was first planted in 1974 by John and Sally Bauers. It was rechristened Goldschmidt Vineyard after the former Oregon governor who purchased the property in 1998. Located in the heart of the Dundee Hills adjacent to a portion of Maresh vineyard and across the street from Le Pavillon Vineyard along Worden Hill Road, this 16.5-acre vineyard has supplied grapes to some of the Willamette Valley's most prominent wineries including Dusky Goose, Patricia Green Cellars, Penner-Ash, R. Stuart & Co., and Adelsheim Vineyard.

In 2006, Bill Sweat and Donna Morris left the East Coast for Oregon and the next year bought the Goldschmidt Vineyard, renaming it Winderlea Vineyard. The name Winderlea is derived from a Vermont property the couple owned and is a German word loosely translated as “valley protected from the wind.” The husband and wife team developed a passion for Burgundies in the 1990s and found Oregon Pinot Noir was the next best thing. They brought on Robert Brittan, the winemaker at Stags Leap Winery for 16 years, to assist Bill and direct the new Pinot Noir program. Brittan himself bought 128 acres in the Willamette Valley, and plans to craft Pinot Noir and Syrah under his own label, Brittan Vineyards. A stunning metal and glass tasting room and winery was built and positioned to take advantage of panoramic views of the Dundee Hills and the Willamette Valley to the East. As I noted earlier in this issue, during the IPNC, I stayed in a retreat on the Maresh property which is only a few steps from the Winderlea Vineyard and Winery. The photos are quite striking (below). 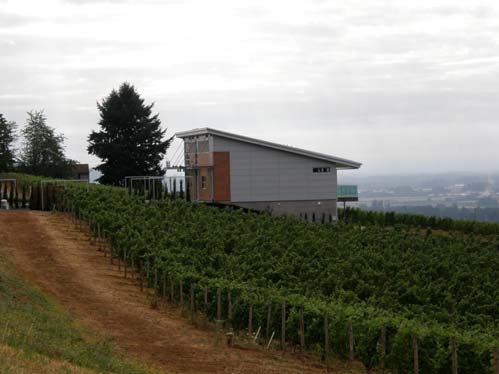 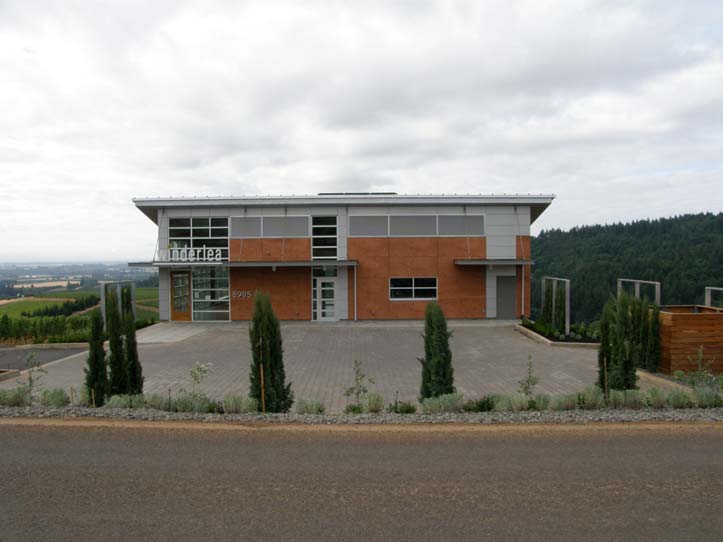 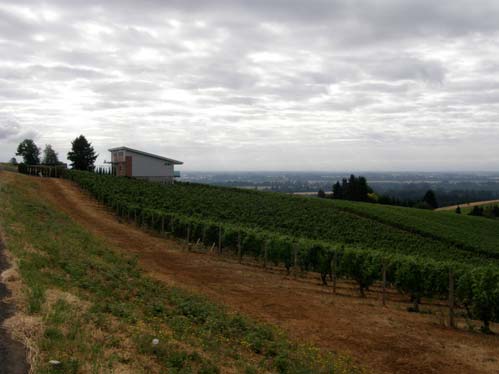 I tasted the two inaugural releases of Winderlea Pinot Noir. Total production was tiny (a total of 575 cases) but will increase in the future as the owners retain more of their own fruit (according to Jean Yates, only Dusky Goose and Penner Ash Wine Cellars will still receive grapes after the 2006 vintage). These two wines are very impressive and this is a producer to latch onto for the future. 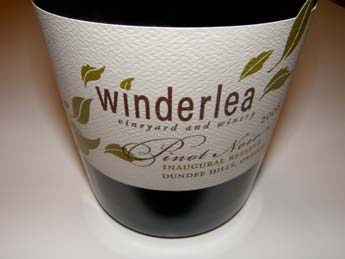 14.2%alc., $50. Sourced from the Ana and Weber vineyards which are located next to Winderlea. These two vineyards are among the oldest self-rooted Pinot Noir vines in Oregon dating back to 1976. The clones are primarily Pommard and 777. · Lovely aromatics featuring ripe and deep red fruits that are nicely spiced with a touch of pear and rose petal. Deep cherry flavors accented with notes of cocoa and pear. Very smooth and stylish with soft tannins.

14.6% alc., $50. Labeled Goldschmidt Vineyard because the vineyard was still owned by Neil Goldschmidt in 2006. Clones 115, 667 and 777. · Heavily perfumed with deep, dark fruit, toast, and wild flowers. Dark red berries and cherries carry the theme with a subtle note of graham and oak, displaying a notable velveteen texture and a slight tart citric note on the pleasing finish.